I went down to the Lonsdale pier to draw this afternoon, which wasn't very clever as there was pea-soup fog.  But this dry pipe valve stood out.  Fans of dry pipe valves will immediately recognize it as a 1953 Grinnell model E2.  With its prominently labeled 150WSP Canada, 6 AC37 and 209-344 ALT, it is widely acknowledged as one of the most sophisticated and stylish of the dry pipe valves.

"Um", you say, "what is a dry pipe valve?"  I'm sure Google knows, but I asked knowledgeable passers-by instead.  Apparently dry pipe valves are used for unloading oil from ships, loading wheat, cleaning barnacles, fighting fires ("On a concrete wharf in the middle of the ocean?"), making fog, mixing cocktails, and are there purely for their aesthetic value (but brass fittings would look better).  So, a multi-purpose apparatus. 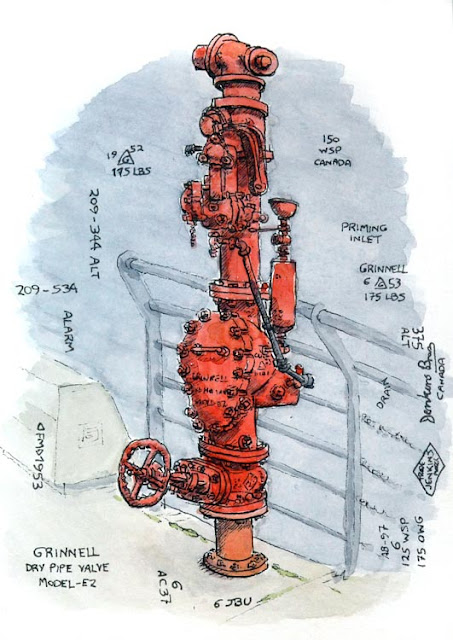