When I'm in Edmonton, I stay at a hotel on Whyte Avenue with an octagonal central hallway, so when I get to my room, I never know which way I'm facing.  This time I was happily surprised to look out on these ghosts signs on the sides of the old brick buildings.  The near one is for Dreger's Kitchen Corner "Your Kitchen Design Center".  The building was built in 1912 for a druggist and a bakery.  It was occupied by Dreger's from 1959 to 1984 - so the paint has already survived for quite a while, including some very 1960's-modern yellow twinkles on the arrow, and will hopefully outlast the graffiti at the bottom.  Times change and the building is now home to a shoe store, a music shop, a tattoo parlour, a bar-tending school and an emporium selling "junque".  Further back, the building occupied by Podersky's Furniture for many years was originally built in 1909 for A.H. Richards and Co General Store.  It now has a clothes store and a frozen yoghurt stand. 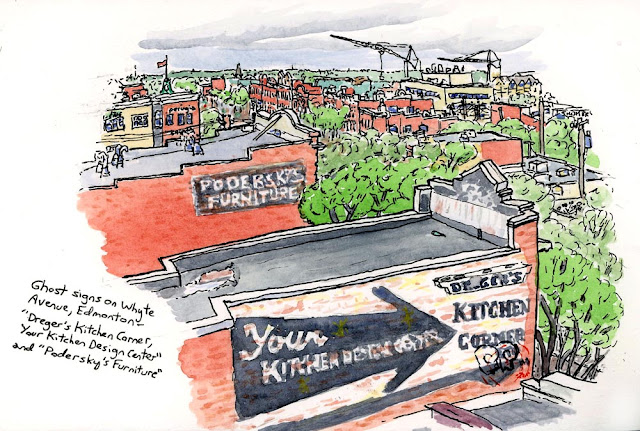