It's not really skipping off work if your computer is running while you're away, so that's what I did.  It was a sunny morning at Mount Seymour, but a bit eerie with smoke from a forest fire somewhere drifting in.  That smell alarms something deep in the animal brain.  But it's hard to beat getting from your house to the top of a mountain in less than two hours, and not seeing another person the whole way up.

I drew on all three peaks.  I figure that hiking up a mountain then drawing on top is a bit like the biathalon - so hiking to three peaks and drawing must be at least a triathalon, or maybe even a hexathalon(?)  The drawings are small, but then so are the peaks.  In fact, they are known locally as "pumps" - an old Scottish word meaning "We're not sure if they're really peaks, or just bumps, so we'll go halfers and call them 'pumps'."  Each is unique.  The third pump, where I started, is the highest and rocky, with views of the real peaks (which would never put up with being called 'pumps') to the north.  The second pump has battered trees and a little pond, with views over the increasingly hazy and smoky ranges to the east.  The first pump looks south over the hazy city, and is just happy not to be called a 'bump'. 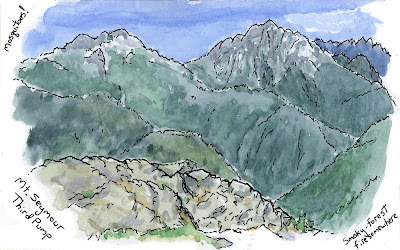 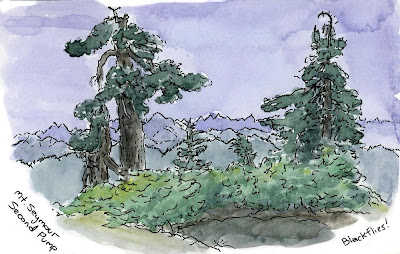 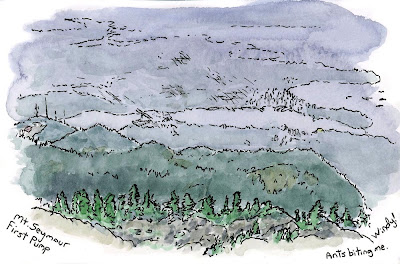