Just another day outside the Art Gallery

The space outside the Vancouver Art Gallery is a good place to find a cross-section of the city.  Today there was the usual crowd of locals wearing various tattoos and serpents, fashionable hipsters, tourists mostly Japanese and Korean (but I also heard Portuguese, Spanish, German, American, Hindi, French and Mr. Bean), drug dealers, someone looking for a public washroom, a man on a soapbox ranting incoherently to a fascinated crowd of one, a rapper perhaps with Tourette's, a bunch of really weird people sketching and painting, a man with a large inflatable penguin, Santa Claus, two demonstrations and several thousand zombies.

One of the demonstrations was against the military in Egypt, an appropriately passionate and serious event.  The other was a Free Hugs demonstration.  As some of you know, my nickname is Hugs, so it was touching to receive the same kind of support given to Nelson Mandela, Tibet, etc.  Although, actually, I hadn't realized I was in any kind of captivity.  But they do say that you are most strongly bound by the chains you can't see. Anyway, it's good to know people are working for my liberty.  And it seemed to be a popular cause - all kinds of people were going up and embracing my supporters.

Then there were the zombies.  There were biker zombies, skinhead zombies, cute zombies, doctor zombies, house-wife zombies, professor zombies, several bride and groom zombies, Japanese tourists lining up for the zombification booth, terrorist zombies, bodacious zombies, policeman zombies (and 3 stoic live policemen), hazmat zombies, American Gothic zombies, cowboy zombies, child zombies, zombies in strollers, and a poodle zombie. They had a catchy rallying cry that went "What do we want?" "Brains!" "When do we want them?" "Brains!"  Then they filled the street from storefront to storefront in a parade three blocks long and went zombieing off, completely stopping traffic throughout the downtown.

So, just another day in Vancouver. 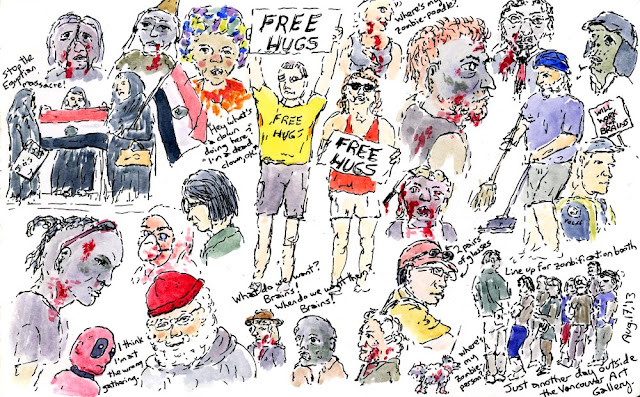