Lonsdale: Saturday in the Park

Nobody who was alive in the 1970's can draw on Saturday in the park without having the Chicago song stuck in their head.  For at least 6 days, apparently.  There was no man selling ice cream, but can you dig it?  Yes I can.  So could several other people, playing, reading, texting in the shade of the big beech trees on one of our endless hot sunny summer days.

As I was doing that drawing in Victoria Park at Lonsdale and Keith Road, I hatched a new project: to draw each of the 38 blocks of Lonsdale Avenue, the "main street" of the city of North Vancouver.  My local neighbourhood is so familiar that it has become hard to go out sketching nearby.  Epic monuments or exotic scenes are singularly lacking here - and maybe everyone feels that way about their own home range.  But one of the points of urban sketching is to appreciate what is right around you, everyday scenes, little details, men selling ice cream, and I'm hoping the project will help me with that.  I decided not to worry about using a consistent style or viewpoint for each block, and to do them in random order, since I suspect that seasons will go by before I'm done.

Fortunately, for the second sketch in the series, my random-number generator (one of her many roles), picked 22, and I could draw the Lonsdale and 22nd Street block while sitting under a shady chestnut tree on another hot and sunny day.  I go often to the Harry Jerome rec centre on this block, to swim, play hockey and lift weights.  I think of it as a big, busy, energetic place.  So I was surprised to notice how well it blends in and almost disappears behind the trees and shrubs of little Crickmay Park on the Lonsdale side.  I apparently blended in to my chestnut tree quite well too, because two older ladies stopped just on the other side of the tree and discussed fairly intimate details of their childrens' personal lives for almost the whole time I was drawing.  The things you learn when you get out in your own neighbourhood,.. 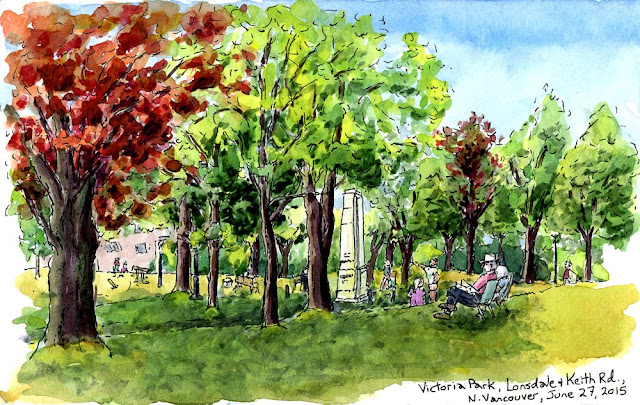 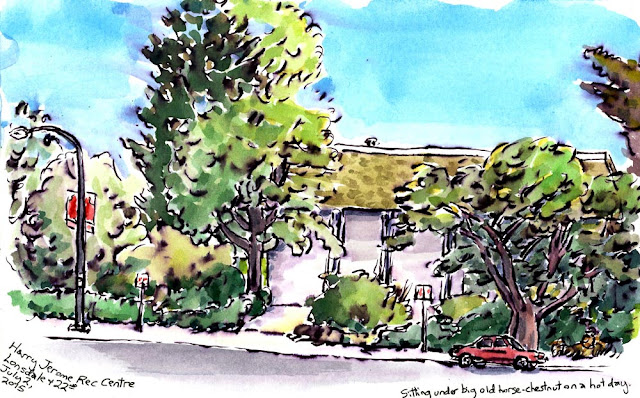