Sea to sky to station to symphony

I covered a bit of ground in Vancouver recently.  The highlight was the Vancouver Symphony Orchestra's reading of a piece by Glenn Sutherland - a biologist friend and erstwhile urban-sketcher, who composes VSO-level music in his spare time.  The piece "To See Again with Spirit Eyes", and music by five other composers, was amazing.  It is well beyond my ability to even think of composing music, let alone for 55 or so top-level professional musicians.  And watching the symphony perform a piece basically on sight, then go through it with the conductor pointing out improvements was incredible.  He would say things like "OK, let's start at bar 75" and off they would go, completely in synch (to my non-expert ear).  My drawing fell short in comparison - I didn't catch the main essence of a theatre, with is how the lighting makes the performers look more real than life, while the (highly ornate) Orpheum Theatre itself just provides an elegant but dark frame.  Maybe I'll get it right when I go listen to Glenn's full Symphony #1 next year. 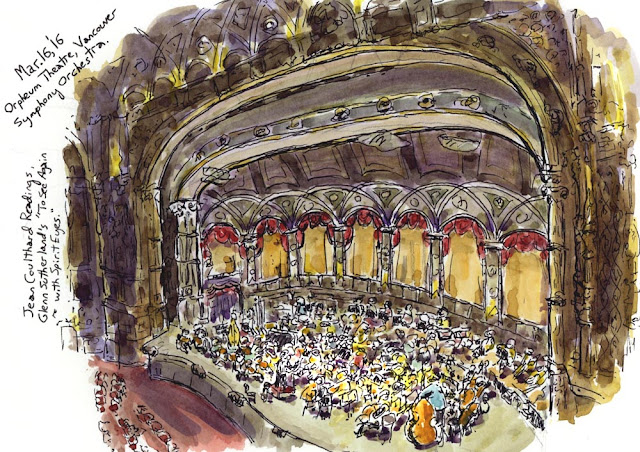 Mudflats may not be exactly what most people would expect to follow the Orpheum Theatre.  I could make up something about the theatre of life playing out on the ecological stage, but really, it's just a place that I like and it's where I went next. 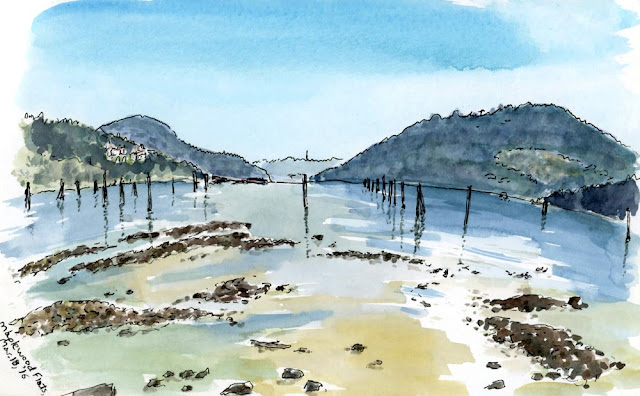 Following the Sea to Sky motto used excessively around here, my next drawing was done sitting in 2 meters of snow at Unknown Lake, up Hollyburn mountain.  It's in the cross-country ski area, where, despite perfect snow and spring weather, it was just me, a curious raven, a lusty sapsucker (my interpretation of his or her persistent drumming) and an irate squirrel. 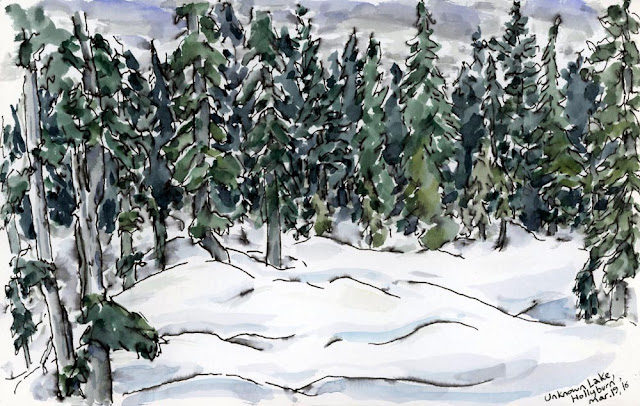 And then, because in Vancouver you are supposed to ski and golf in the same day, and I don't golf, a quick trip over town to the Vancouver Urbansketchers 3rd anniversary meet-up at the train station, where it all started.  I just caught the tail end of the meet-up, so did my own quick sketch afterwards.  I sat at a bus stop with a talkative old man (language spoken not entirely certain) and two Canada geese.  I didn't find out why the geese were waiting at a bus stop. 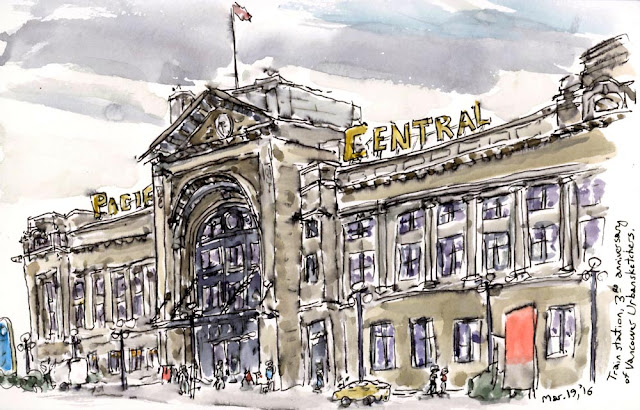