I started drawing the 37 blocks of Lonsdale almost a year ago.  When I realized that a week ago, I decided to finish before the year was up.  The problem was that I had 12 blocks to go and only 2 weeks.  So I brought out that one trick urban-sketchers always come back to - draw faster!  For me, that means using a cartridge pen with water-soluble ink, so I can't be so fiddly with the lines and the paint.  I either have to be quick and loose, or make a big black blob.  I picked 7 of the remaining blocks randomly, but then cheated a bit and did them in order from top to bottom, so I didn't have to ride up and down the hill too often!  I tried to do all 7 in one afternoon as 15 minute sketches, but the weather and my tendency to put too much into each drawing meant that I got 4 done, and had to come back for the rest.

I'm finished with what I think of as "hedge blocks" - residential areas at the top of Lonsdale that barricade themselves from the roaring pick-up trucks with a lot of coniferness.  I can't say those were my favourite places, but there was sometimes a nice view of the city.  I may also be done with the blocks that feature vintage condo buildings from Vancouver's historical Leaky Condo era of a decade or two ago.  Not too sad to see those done, either.  But I did get to do a couple retail blocks that still have the mix of independent restaurants and family businesses.  They have been formed by evolution over the years, and are a lot more appealing - and populated - than the Lower Lonsdale block I drew with its carefully designed and controlled development of condos with street-level store fronts - actually, real estate offices and "beauty spas" with no customers. 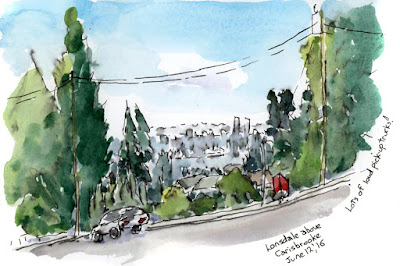 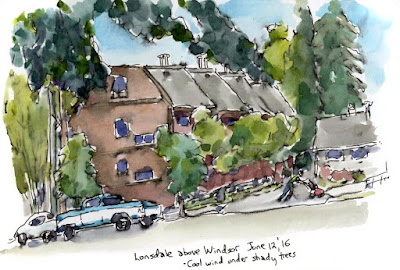 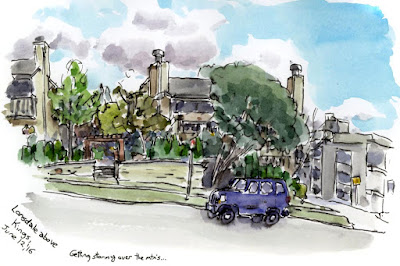 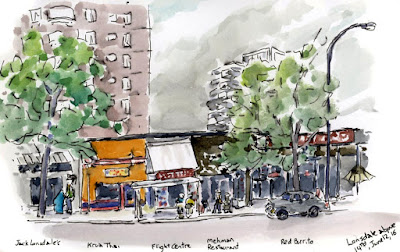 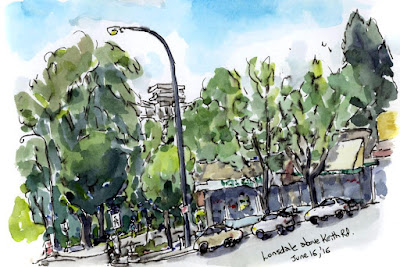 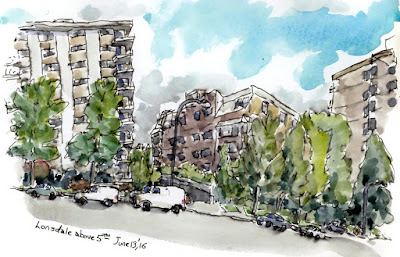 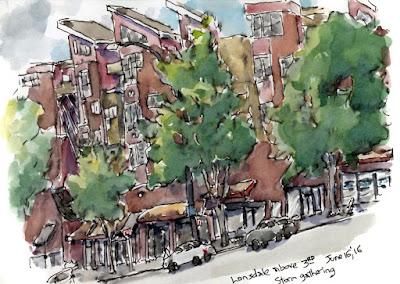