One of the neighbourhood cafe has a bonus for sketchers - it's on a street corner, with full windows looking in both directions and a handy counter.  You get people coming and going in four directions outside.  The only problem was that it was sleeting outside and toasty inside, so the window was fogged up.  I kept wiping the window, but if my drawings of passers-by look a bit cloudy, that's why.  The sleet also meant that people were bundled up ready for an Arctic expedition, most were in a position of hunched-down abject misery, and dark grey was the fashion colour of choice.  I felt like buying a coffee for the few people who were wearing colours.  Highlights included an old lady with a walker and high-heeled boots, a lady with wild blonde hair running like she was escaping from the asylum (she came into the cafe - I think she just really wanted a latte), and a Vancouver classic - the guy who wears shorts all year just to show that you can do that in Vancouver (even though we've had snow on the ground for three months now).  I did all the dip-pen-and-ink drawings first, then went back and filled in watercolours based on memory or whoever was passing by at that point. 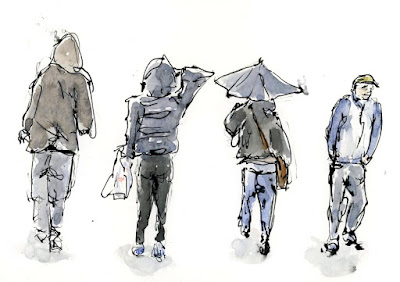 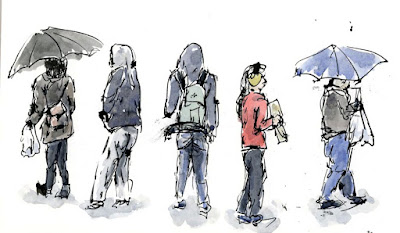 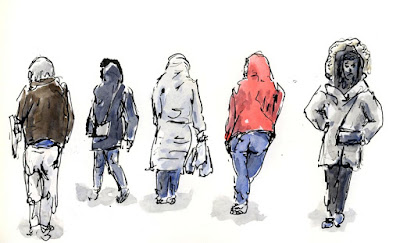 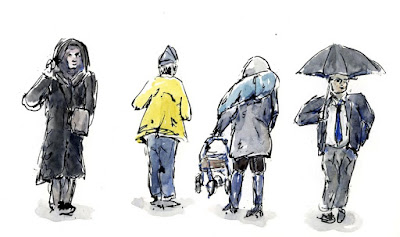 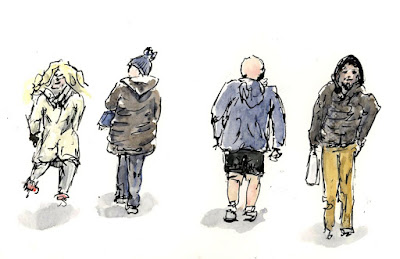 Email ThisBlogThis!Share to TwitterShare to FacebookShare to Pinterest
Labels: #OneWeek100People2017