Charles Edenshaw and Kimsooja at VAG

I went to the Vancouver Art Gallery last Saturday by accident - or, more precisely, to avoid an accident.  I was riding home from Granville Island, rapidly, in the (awesome) dedicated bike lane on Hornby St, when two city workers carefully looked at me approaching, then stepped right in front of me with a traffic barricade.  I swerved to avoid crashing through them, then swerved to avoid a pedestrian, and ended up pretty much at the gallery entrance.  Figuring that it wasn't safe to cycle in Vancouver at that moment, in I went.  I hadn't been inspired enough by the publicity for the current exhibitions to bother going before, but I'm glad I did.
The main exhibit was work by Charles Edenshaw, a Haida carver from the turn of the previous century.  We see a lot of coastal native wood-carving here, and it is all so well done that we get a bit blase.  But his work really stood out for the fine detail of the work, and the variety of media - some wood, but lots of argyllite (a fine-textured ebony black claystone), silver, gold and ivory, as well as paintings and drawings on paper and woven hats and baskets.  It's powerful to see the various Haida motifs repeated in the different media.  It was really an excellent exhibit, and worth a repeat visit.
The other exhibit I saw was by Kimsooja, a contemporary Korean artist, who works with textiles and video.  Normally, neither would be high on my favourites list, but the textile work was appealing at first because of its exuberance, and then because it was thought-provoking in subtle ways.  But it was her large-scale, multi-screen videos that were most entrancing - again, worth the price of admission (especially if you have a membership and it's free).
I like to draw in galleries, because it makes me look at a few works carefully and makes a much richer experience.  Sometimes I feel like a bit of a lunatic, sketching in front of one piece for several minutes, while everyone else spends their average 3.5 seconds and rushes on (now that I think about it, that was a theme in Kimsooja's video installations).  But this Saturday there was a huge crowd of fellow sketching lunatics.  It was Family Day so admittedly all the other sketchers were knee-high, but sometimes it's good to just be the biggest lunatic, not the only one. 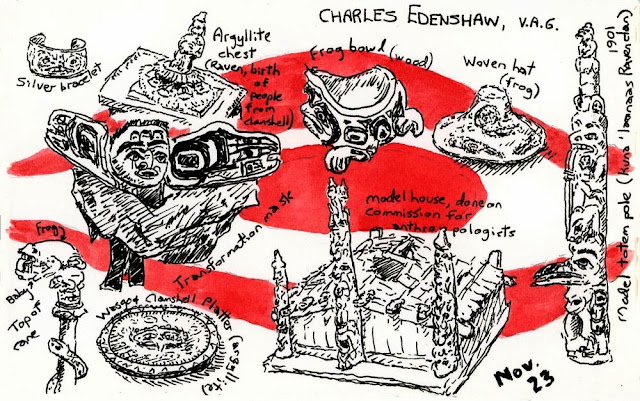 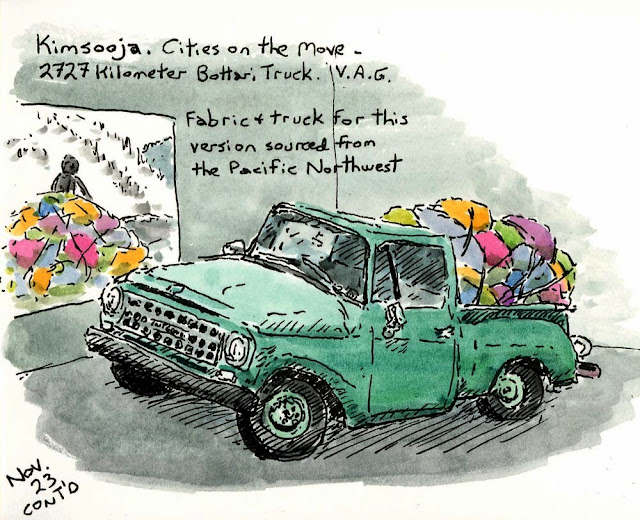