Our other stops on Isabella island were at Urbina Bay and Tagus Cove.  The area we walked at Urbina Bay didn't exist until 1954, when volcanic activity lifted it out of the sea.  It has scrubby young vegetation, and was a bit barren on a cloudy day.  Tagus Cove is an almost-complete circular harbour formed by a flooded volcanic crater, and a popular stopover for ships through the ages.  Crews from many of these carved, or later spray-painted, the name of their ship on the cliffs - a somewhat jarring thing to see in the otherwise pristine area, and now prohibited by the park service.  One of the carvings was supposed to have been made by Darwin, but what I could see looked like "DWNA...".  Maybe he was just a bad speller?  I tried a 360-degree drawing of the cove, with limited success.  One of the hardest things about drawing in the Galapagos is that the dominant tree, palo santo, is completely white - it's just not possible to draw a bunch of white lines with a black pen, so the drawings miss the ghostly look of the forested slopes.

We continued on to Fernandina, the westernmost and most volcanicly active island.  There is only one area on the island where visitors can land, a recent lava flow.  The shoreline is thick with big marine iguanas sunbathing, fighting and mating, penguins, sealions and flightless cormorants.  We then headed north across the equator, around Isabella island to Puerto Egas on Santiago island.  This was the site of a salt mining operation years ago, with one abandoned building being the main sign of any settlement.  The big excitement from a biologist-sketcher's point-of-view was that Darwin's papers include a reference to drawing marine iguanas while sitting in a round rock "chair" at this site.  There's only one option for that "chair", so I was able to sit in the same spot and draw an obliging iguana.  I don't know how long iguanas live - maybe it was the same one?  Charles' drawing is probably better than mine, but it brought up the idea of historical drawing re-enactments - a new subgenre for sketchers? 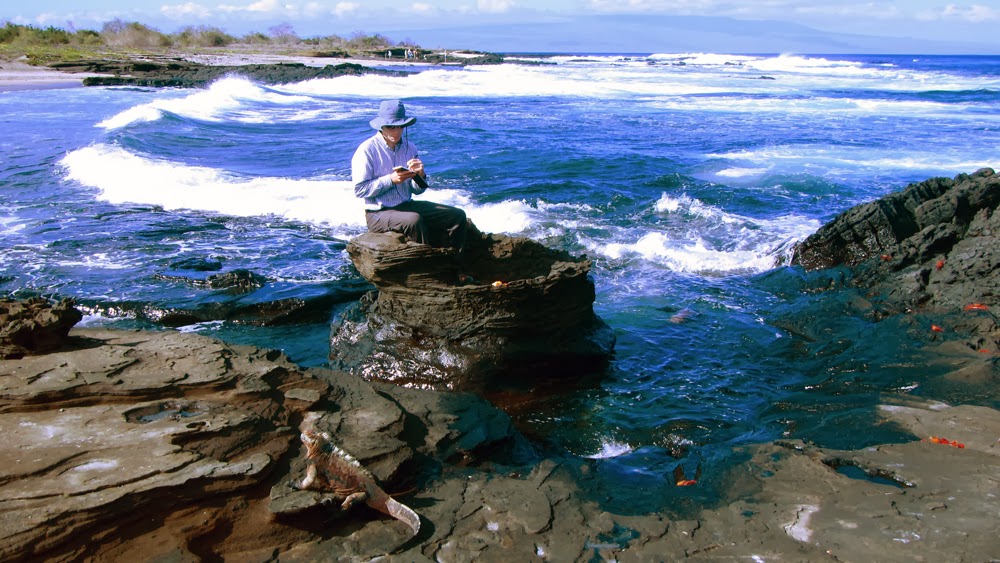 We then crossed the bay to Espumilla Beach, a long red-sand beach with turtles mating just off-shore prior to coming ashore for egg-laying.  The beach and forest were otherwise mostly quiet, except for herds(?) of ghost crabs, but the reefs offshore were teeming with fish when we snorkeled. 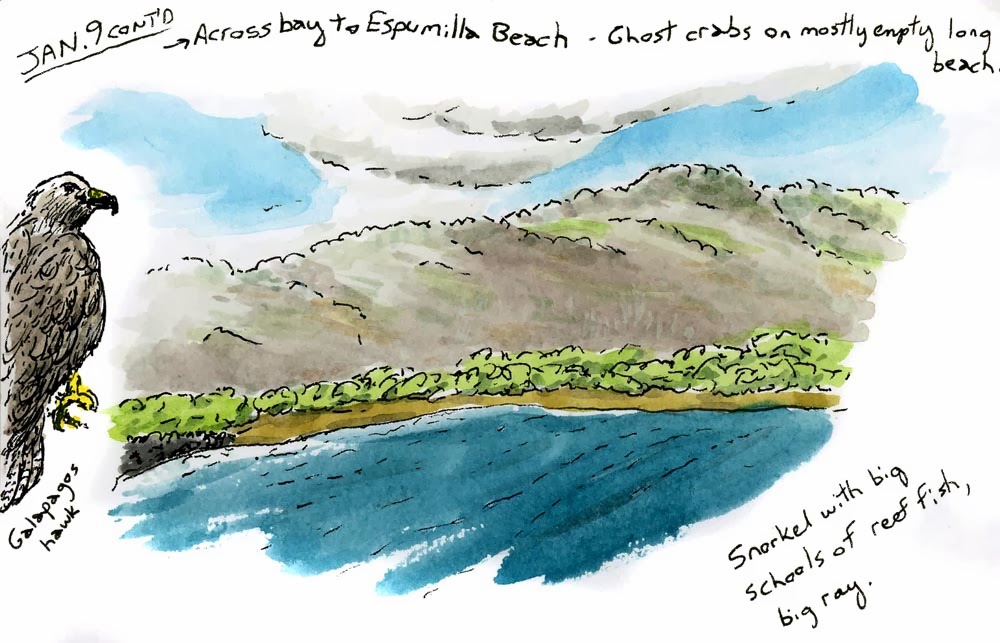