The Galapagos are an hour-and-a-half flight from the mainland, one reason they are distinctive - they are well beyond the continental shelf, so they have never been connected to the continent when oceans are low during ice ages.  The flight lands at an airstrip made by the US during WW2 on Baltra Island, where visitors get on their boats.  In our case, this was a 12-passenger catamaran with an 8-day itinerary around the western and northern islands. 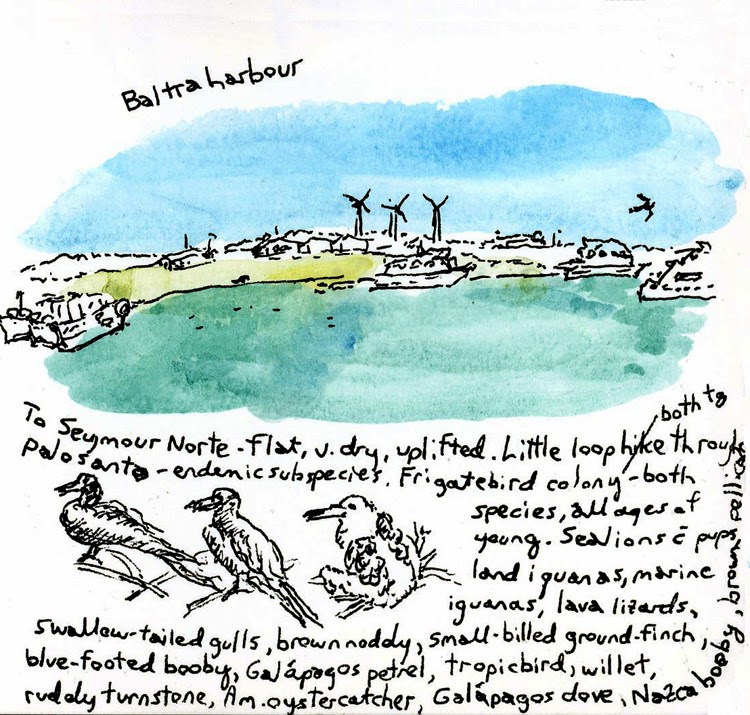 Our first stop was on Seymour Norte, a small, low and dry island with nesting frigatebirds.  That evening, we sailed down to Puerto Ayora, the main town in this end of the islands.  The next day, we took a bus inland into the highlands, mainly to see giant tortoises.  This was the only time we could get to the wetter and fascinating highlands, because park rules on the uninhabited islands only allow fairly short land visits, and only along very carefully controlled trails at visitor sites.  The rules are obviously needed for conservation, but they are a bit frustrating for biologists who would love to explore further afield.  And also for sketchers, who didn't have much time to draw on land (which is why most of my sketches are views from the boat).

The next day, we left civilization behind and headed to the western side of Isabella Island, the largest in the archipelago, formed by 5 joined volcanoes.  The western islands are the youngest ones, and still very active volcanicly.  They also have the coldest currents, supporting unique birds like the Galapagos penguin and flightless cormorant, as well as thriving communities of reef fish.  We saw one other boat occasionally, but otherwise there was no sign of humanity - just raw geology and wildlife everywhere.