From San Gerardo de Dota, we got a ride up the 9km to the Interamericana highway.  It took just over an hour (I mentioned that it is a very steep 9km...)  Then we flagged down a bus heading down the mountain.  This turned out to be more challenging than expected.  When we were in Costa Rica 25 years ago, all the buses were retired school buses from North Carolina that had made their way south - getting ever older the farther south they made it.  You didn't even have to flag them down - they went so slowly you could basically walk briskly and just climb on.  Buses are now much fancier, and they go at a good clip along the highway.  Which meant that the first two hourly buses blew right by us.  It took fairly vigorous waving and nearly throwing ourselves on the road to make the next one stop - just as a very cold fog was settling over the pass.  It was a fairly comfortable ride down into San Isidro, even though we had to sit in the stairwell of the back door.  The bus even had wi-fi - a pretty good deal for the $3 price.

San Isidro was 28 degrees C hotter than the pass (the bus had a digital thermometer too).  We had a few hours to wait for the ongoing bus to Dominical, so we hung out in the shade in the central park, eating the street food and watching the passers-by.  Lonely Planet reports that San Isidro has the most beautiful women in Costa Rica - possibly the only useful information in the whole book.  Several passed by, clad in what I suspected might be their professional attire.  More sensible women went by under umbrellas in the scorching sun, and everyone was stopping for shaved ice and fresh orange juice (50 cents a litre).  Even the inevitable soccer game was having a siesta in the shade. 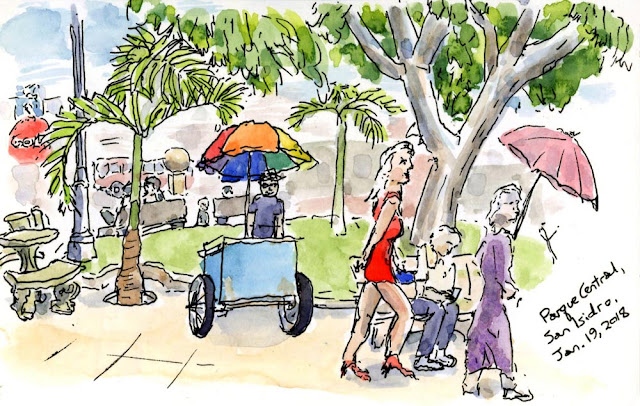 Last time I was in San Isidro, 25 years ago, I was waiting in a big crowd to get on a bus when one of its tires exploded.  It was like a bomb attack, and people went flying to the ground, a bunch of chickens escaped their boxes, and two pigs somehow materialized to add to the pandemonium.  It was much more peaceful this time waiting for the bus to Dominical, and I got in a quick drawing of the street opposite. 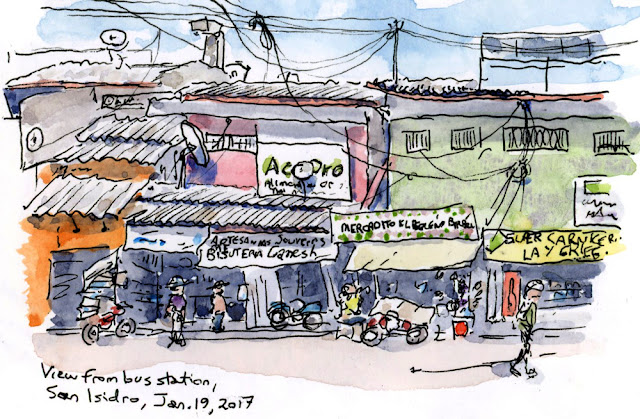 The bus to Domincal made the 33km trip in a record 2 hours.  The old buses only went that fast when their brakes failed.  And we had real seats, so I could draw the crowd.  (I was probably the oldest person on the bus - otherwise I do give up my seat...) 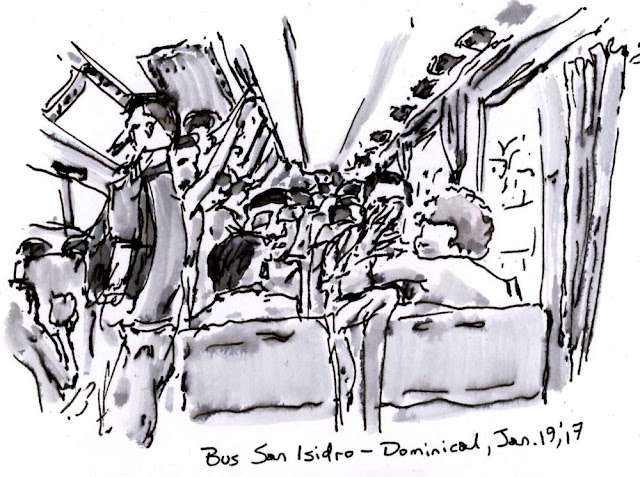 Dominical is a surfer village on the Pacific coast, heavily gringo'ized.  Lots of dreadlocks, bikinis, board shops and yoga classes on the beach. Like most places in Costa Rica, it also has several big parks right near it.  It was a fun place to hang out for a couple days, but I don't think I'll be getting the one-way ticket that so many Californians and Aussies had.  This is the main street.  The big sign is for a micro-brewery.  On second thought, maybe that one-way ticket isn't such a bad idea... 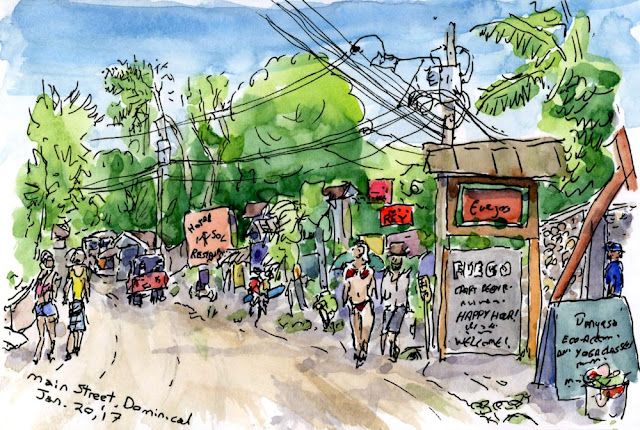 Like many other west coasts, the sun sets there too. 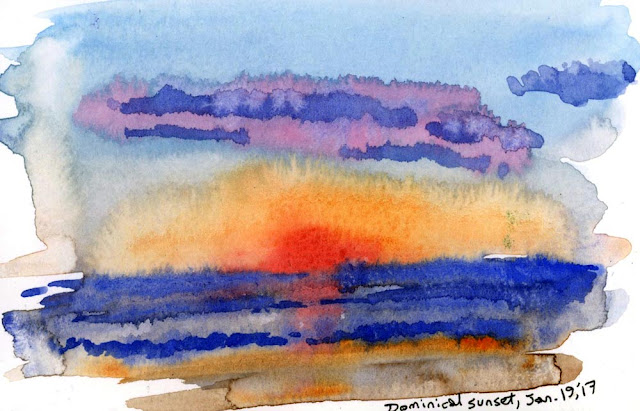