Our second week in Costa Rica was spent on the Osa Peninsula in the far southwest.  I didn't make it there 25 years ago because it was too dangerous - rogue gold miners in the relatively new Corcovado Park were robbing people.  Not so any more.  In fact, the park is the gold mine now, a large area of primary lowland forest that is a main attraction on the peninsula.  It is surrounded by even larger areas of wetlands and other forest that is now more valuable as park land than for raising cattle.  Puerto Jimenez is the end of the somewhat-paved road.  It's hot and dusty, but a pleasant town with a frontier feel.  Most vehicles are 4-wheel drive trucks or motorcycles, or - our choice of transportation - old cattle trucks (we were in the cattle part, not the people part).  A mangrove estuary divides the little town, scarlet macaws make more noise than people, and howler monkeys hang out near the airstrip roaring at incoming small planes. 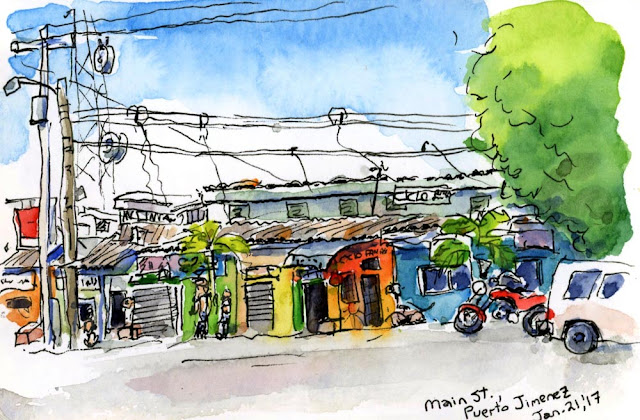 We made the 30-km trip to Carate, on the edge of the park, in 3 hours in the aforementioned cattle truck - a pace that would be challenging for a moderately good runner.  Actually, that included a half hour stop so the driver could have lunch at his uncle's.  Our destination was Lookout Lodge, a place built like a beautiful tree-house on the side of a steep hill, where monkeys and macaws came and went from the open decks and rooms, cougars sleep on the trail nearby and the little pool has a rock barrier to keep tapirs out.  And there is a happy hour every day.  It meets all the criteria of the formal definition of paradise.  Including the fact that the first creature we saw was a large snake, and the last creature we saw, as we were being driven out, was a larger snake.  This is the view from the lookout:

There are waterfalls in the jungle nearby. 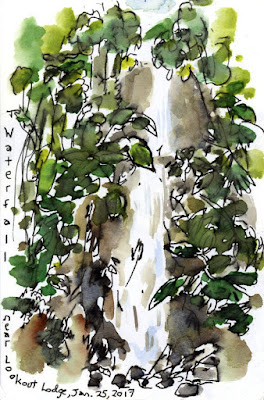 The sun sets, every day. 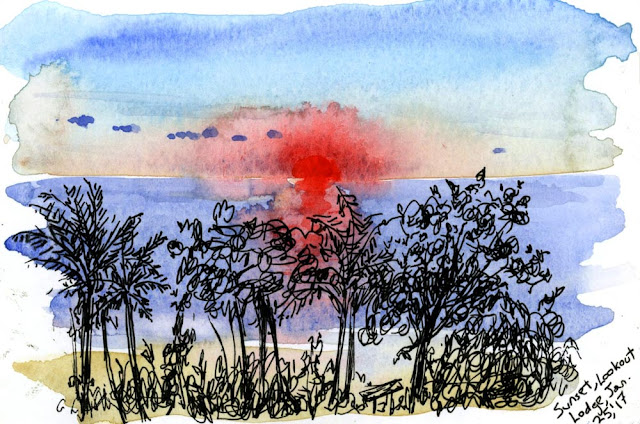 And there are monkeys, lots of monkeys!