Our best laid plans to get from Cornwall to our flight from Exeter and thence to Italy neglected a simple but little known fact - trains don't work when there are wet leaves on the tracks.  Which happens quite regularly in fall gales in England.  The train arrived late, then we sat on it as it crept along, shuddering every time the engine slipped, while we watched the projected train arrival time get closer and closer to the flight departure time.  Eventually we made the decision to bail out in a small town, still in the pitch dark storm, and managed to roust a local taxi driver for the long drive to the Exeter airport - a bit stressful and fairly expensive, but we made the flight and ended up in Genoa as planned late that afternoon.  And in time for a quick sketch of the central piazza.

Genoa doesn't get much respect among Italy's cities, and a lot of it is a gritty-looking industrial port.  But the large old town is a fabulous mix of grand buildings on big piazze, streets of the elegant palazzi of previous centuries' very rich, and a chaotic warren of narrow caruggi (winding laneways), much of it a UNESCO World Heritage Site.  The caruggi are my thing - from about 1 to 3 meters wide, they are too narrow for any vehicle bigger than a scooter, so they are just full of people going about their business on foot.  Sometimes that business is quite disreputable, especially in the narrowest caruggi, so it was a bit exciting exploring at night, but during the day they cover the range from fashionable businesspeople and stylish luxury shops in the widest parts, families doing groceries at the fish markets and vegetable stands in the mid-width ones, and in the narrowest side branches - well, the prudish might still want to stay out of those. 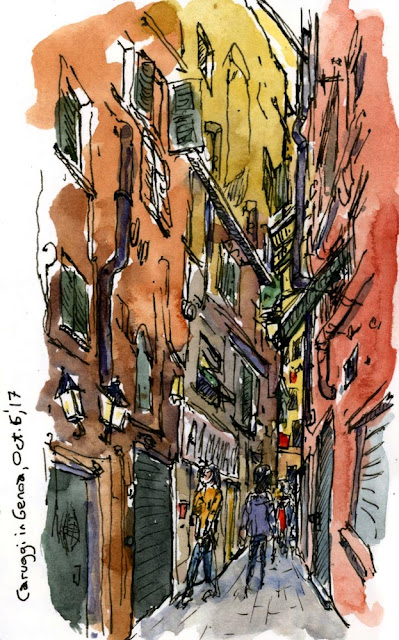 Like other old European cities, there is detail everywhere.  Which means you can stop at a random location - like, say, a pasticceria serving pastries and cappuccino in a little piazza - and find any number of things to draw. 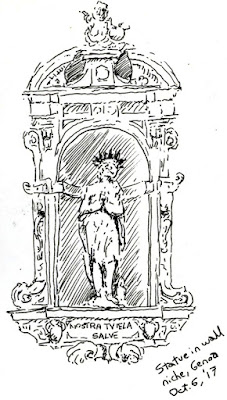