So, I was looking for tickets to Toronto to visit my family when I noticed that the ticket from Vancouver to Varadero Cuba was the same price as the Vancouver-to-Toronto ticket.  I developed this into quite a good rant: "Why do I have to pay as much to fly to Toronto as to Cuba?  In fact, the flight to Cuba goes through Toronto, so I can fly to Toronto and Cuba for the same price as flying to Toronto.  That's absurd.  Why on earth would... Oh, wait a second..."  So I went to Cuba.  And to Toronto.  They are saying "Change is coming" to Cuba, which is hopeful in many ways to many people.  But also a bit ominous.  I had to get to Havana to sketch in these days - long may they last - before the infernal Starbucks logo showed up everywhere. (The company may be fine, in its place.  It's the logo that is infernal - white on dark green, impossible in watercolour).

But first, the free stop-over in Toronto.  The longest journey starts with a single airport-lounge sketch, so here is YVR at dawn.  Red in the morning, travelers take wa... OK, never mind. 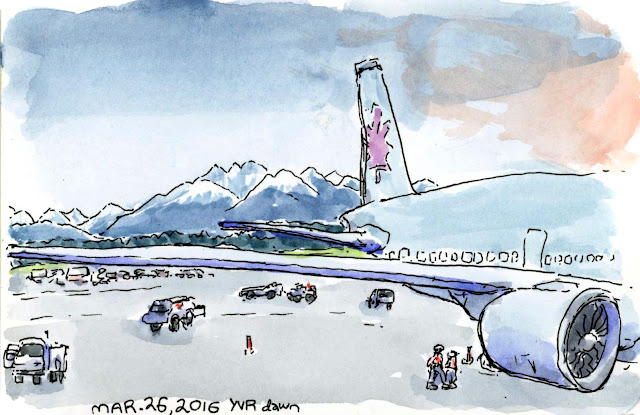 I got to Toronto for Easter dinner and egg hunting with my family, with time to visit some familiar haunts.  This massive willow is in the ravine nearby, showing the ravages of several big ice storms.  And it was sheltering a bit of late-season snow. 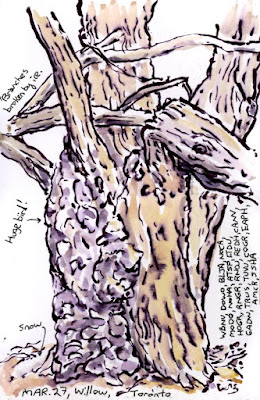 But change is certainly coming to the home turf of Don Mills.  The original planned community in Canada, it is now undergoing monsterification at a rate and scale that puts North Vancouver's to shame.  These two enormities are going up (and up, and up) beside each other, one built from concrete and steel, the other apparently from construction paper and Elmer's glue. 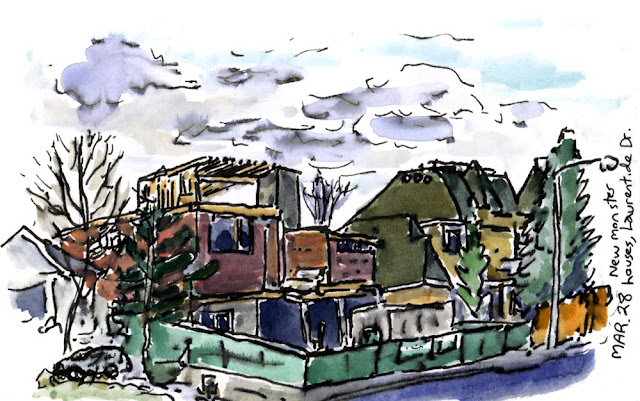 As a bonus, I got to go with my mom to see an exhibition of paintings by the Beaver Hall group, showing at the Hamilton art gallery.  My great-aunt Prudence Heward was a member of the group, and I don't often get to see her paintings.  The Beaver Hall group were jazz age contemporaries of the Group of Seven.  They were as important as the GoS in initiating modernism in Canadian art, but are less known for historical reasons: they were in Montreal instead of Toronto, and many of the prominent members were women.  Their landscapes tended towards urban and rural scenes, rather than iconic wilderness, but their greatest strength was portraits, often strong, psychological portrayals of women.  And even, scandal!, nudes - in Canada!  It was great to see so many of their pictures together, with some time to sketch a couple to help me remember them.  The exhibition is worth seeking out if you happen to be in Hamilton, or its next stops in Windsor and Calgary, or look for the excellent catalog. 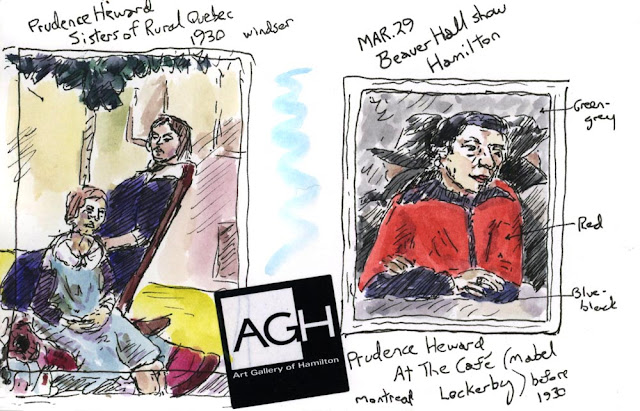 Tomorrow's installment: on to Chez Che.