I had a more leisurely day in Havana, not feeling I had to hike around frantically trying to take it all in.  I started by changing some money, which can be a very leisurely pursuit, but by then I had a grasp of the queuing system and Cuba's two currencies, and it was pretty smooth.  And any waiting time is drawing time.  This bank was in an elegant old building, although when I looked from the outside, one corner was collapsing and patched together with plywood. 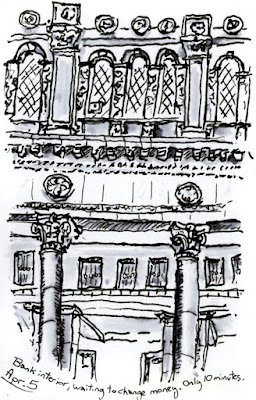 One challenge drawing in Havana is the touts trying to sell you something, but that's mostly a matter of getting away from the touristy areas, and knowing enough Spanish to get rid of them politely or humourously.  A common intro is "?De donde, amigo?" (Where from, friend?).  If you reply "Canada", they will tell you about their sister in Montreal, leading eventually to the inevitable tale of woe.  So I started answering "De Antartida, soy pinguino"  ("From Antarctica, I'm a penguin.")  No sisters there, everyone laughs, and you're left alone.  Males travelling alone also get lots of offers for "?Chica, senor?", to which I replied "No gracias, ya tengo bastantes."  (No thanks, I already have enough).  Kids also come up to you asking for gifts like pens or soap.  Cubans discourage giving into this, because the kids are inevitably working for someone who sells whatever you give them, and the kids start skipping school to pursue the short-term profits.  Much better to give to organisations, or simply spend your foreign currency, most of which goes to the government which provides the education and health care.  For me, a bigger drawing challenge was simply the overwhelming amount of detail, especially when you want to capture so much.  On a bustling side-street, I tried to do a detailed pen sketch then just colour the central point of interest.  I'm not entirely sure that worked.  The next one I reverted to my fat water-soluble pen, which guarantees that I have to simplify. 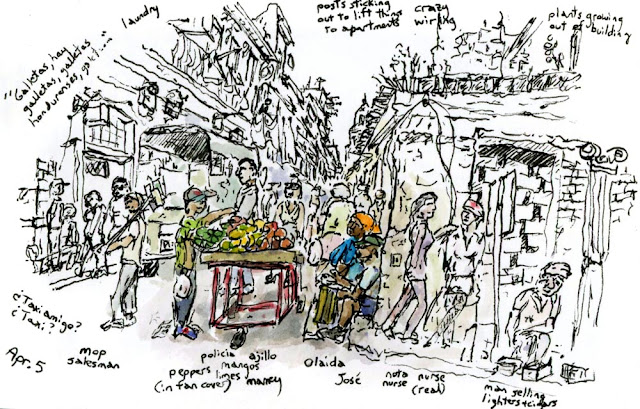 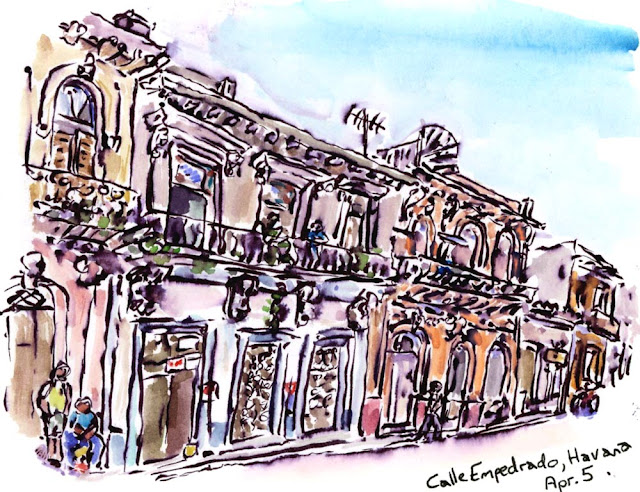 I stopped by the national gallery, the Museo Nacional de Bellas Artes, sticking to the building with Cuban art.  I wasn't expecting much, but it was fantastic.  (And it was also the only air-conditioned building I was in the whole time).  They have some colonial era paintings, and a section from the early modern period when everyone was imitating the Europeans.  But most of the large space was devoted to more recent art, and I really enjoyed the quality and some of the messages I gleaned about Cuban identity (okay, I also tagged along with a passing tour group with a very insightful local guide).  I found many new-to-me artists for future googling. 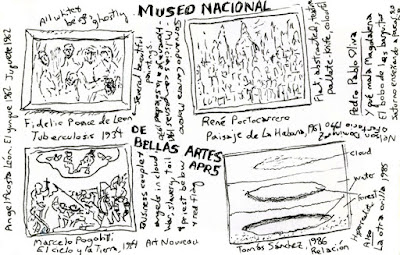 Cuban artists have a relatively high stature in the egalitarian country, and there are some top-notch studios around.  Printing studios seem particularly favoured, maybe because of the revolutionary history of posters and pamphlets.  I visited the Taller Experimental de Grafica, a big open studio with a group of artists drawing and printing, and with its own high-end gallery, then had dinner at the Magritte-inspired Eso No Es Un Cafe outside, while a son quartet played. My excellent meal was Pollo Pollock, chicken with colourful sauces splashed around the big plate, a la Jackson of the same name. 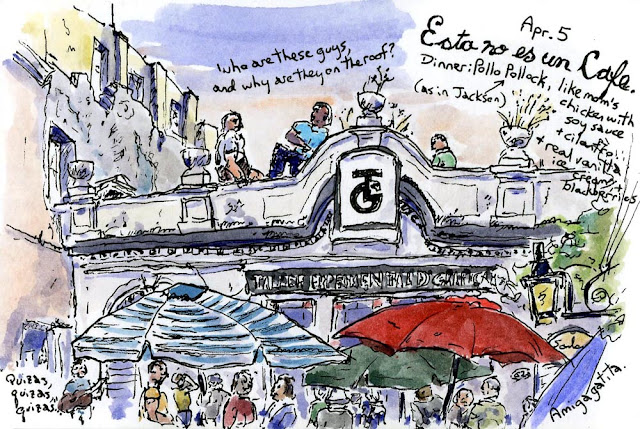