Vinales is one of 3(?) places in the world with mogotes, vertical-sided limestone mountains.  They give an other-worldly appearance to the landscape where they pop out of flat valleys of rich red soil, where the best Cuban tobacco and other traditional crops are grown.  I circumnavigated the little mountain range in this picture, a distance of about 6km, walking along well-worn foot, horse and oxen paths through fields and patches of forest.  And occasionally less well-worn paths when I got lost.  I didn't see any mechanized vehicles in the valleys, just ox-carts, oxen pulling plows, and people on horseback or in horse carts.  They were all much faster than me, because I had to stop to look at all the birds, ranging from the tiny spherical and brightly-coloured Cuban tody to the large but very stealthy great lizard-cuckoo.  I also saw a Cuban hutia, a big rodent that looks like an arboreal beaver.  And I was reminded the hard way that you are supposed to tuck your pants into your socks when walking in chigger country.

I talked to various people en route, even managing to understand a few words of what they were saying in the spectacularly slurred rural Cuban dialect.  Tobacco farmers are given fertile land by the government, but they have to give 90% of their crop to the state.  They have quotas they have to meet, or they lose the land (though they may also have plots elsewhere with other crops).  The other 10% of the crop they can make into cigars and sell.  They come up with all kinds of secret tricks for aging, flavouring and rolling the tobacco to make their cigars stand out from the rest. I declined to purchase any cigars since I use my lungs for other things, but it is a very appealing to see the age-old traditional craft.  And I was glad that I could stand under the big ceiba trees watchng the farmers and the birds, and not be out driving an obstinate ox-team or bent over harvesting the tobacco leaf by leaf in the hot sun. 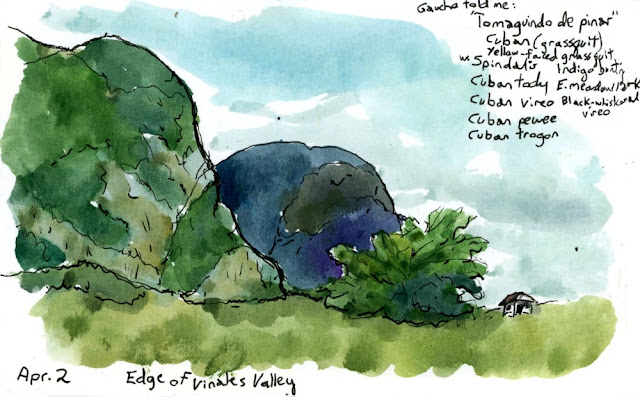 The paths around the mogotes join a road again at the Mural of Prehistory, a huge cliff face carved into a mogote and painted in a psychadelically garish mural, with images of...well, I'm not sure what exactly.  It is a good example of why people should never let their revolutionary leaders design large public art.  It was definitely not Fidel's greatest moment.  I didn't draw it, because watercolours wouldn't do it justice.  You'll just have to go see it yourself, perhaps as part of a tour of the world's 10 most hideous art works?