I spent my first full day in Havana doing the urban exploration equivalent of a marathon. I walked around Havana Vieja, through the labyrinth of Havana Centro, to the University and into Vedado, the pre-Revolution enclave of the wealthy and corrupt.  This was no stroll through the mall.  It was more like urban bushwhacking, constantly stepping sideways or backwards to avoid other pedestrians, people sitting on their front step, passing cars or bicycle taxis, holes in the sidewalk or road, and the occasional rogue chicken.  But the exhausting thing was all the stimulation from the crowds of people, block after block of beautiful decaying buildings, the thousands of details of everyday life lived in the streets, music, noise, smells...  I picked a relatively peaceful street for my first drawing of the day. I was told that anyone who is friendly in Havana is trying to sell you something or get money from you one way or the other, and that may be true when you are walking through the touristy part of old Havana.  But when I was drawing, I'd say 4 out of 5 people were genuinely friendly and interested in what I was doing.  And the others eventually got bored and gave up on me. 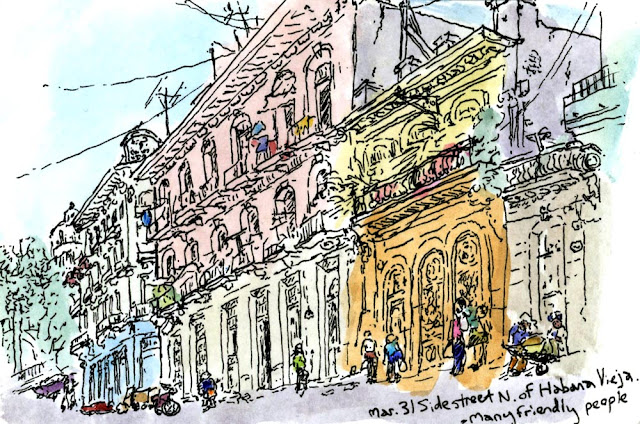 When I got to the University, I was glad for the shade of a huge ceiba tree (as identified to me by a helpful student), where I sat and drew the aggressively classical architecture of the Mathematics Faculty.  And the less classical Ladas in front of it.  This is the most important building on campus, I was told by another helpful student, because it is where the Cuban communist party was started.  The students were definitely an earnest lot, although I did see one large group gathered around a laptop looking at what seemed to be the viral video of the day.  Or perhaps a speech by Fidel? 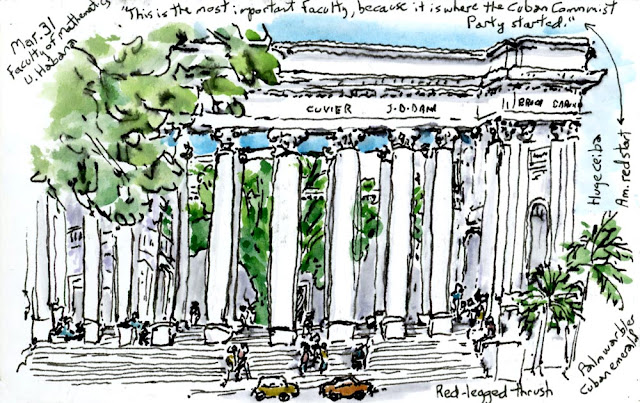 After the long walk, I was saved from starvation by a passing tamale vendor, and from complete exhaustion by a cocotaxi ride back to old Havana via the Malecon (seawall).  And then by one of Cuba's great contributions to the world, a mojito.  Bartender Wilson at 304 O'Reilly - a trendy private restaurant where me and my buddy Mick hang out* when he's not playing concerts to 500,000 Cubans - is a legend-to-be and his cocktails works of art.  The mojito disappeared before I could draw it, so I had to order a Havana special for sketching purposes. 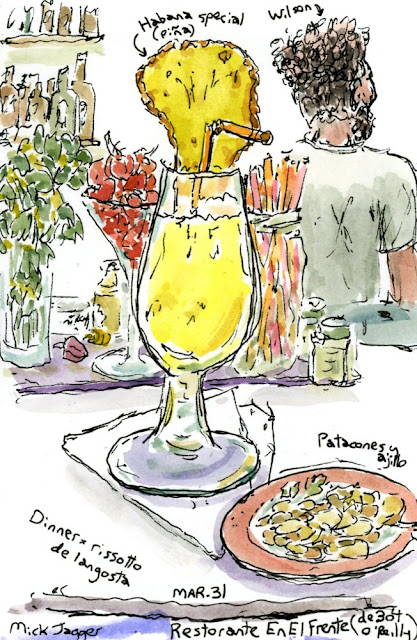 I was actually sitting at the rooftop extension of the restaurant across the street, so had a view of a typical apartment, or probably 3 or 4 intertwined apartments, in a well preserved building. 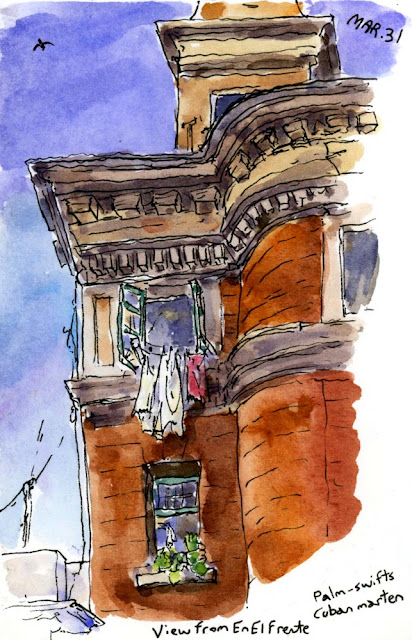 And then, because Havana is pretty much completely safe, I could hang out on the street and draw after dark, while music played in several directions, people strolled by, little kids played games in the streets, and the older kids hung out in a doorway and were cool.  But not so cool that they couldn't send one of the group over to see what I was doing and give me compliments on the drawing. 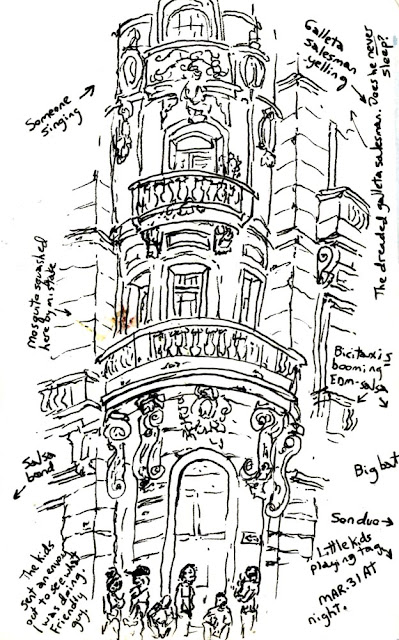 * Not at the same time