I joined my friend Russ for a hike up Needle Peak, near the Coquihalla summit and about halfway between his home in Kamloops and mine in Vancouver.  It's a great hike, with the first half hour or so on a steep forested slope, but then the rest of the day in rocky subalpine and alpine.  A little scramble took us to the summit, which looks like it should take a lot more climbing to get there.  The drawing has Needle Peak in the background of an alpine tarn on Flatiron mountain, the next peak over, and an easy part of the same day's walk.

We are working on disassembling an old abandoned cabin in the Hollyburn Ridge area, and eventually rebuilding it.  The cabin dates from the 1920's or 30's and is called The Viking, for reasons lost in antiquity but presumably involving a Scandinavian.  It spent part of its life bright pink, apparently as a protest against some restriction imposed by the municipality that administers the land.  Some of the purlins are an orange that must have come from the 1970's.  So far we have removed a large amount of junk that accumulated in and around the cabin, braced the supports so that it doesn't fall down while we're working on it, removed the metal and shake roofs, and pulled out windows and a framed porch.  The yellow cedar logs will start coming down next.  I did also find some time in there to hike up to the peak.  It was covered in fog, but the bumper crop of huckleberries and blueberries more than made up for the lack of view. 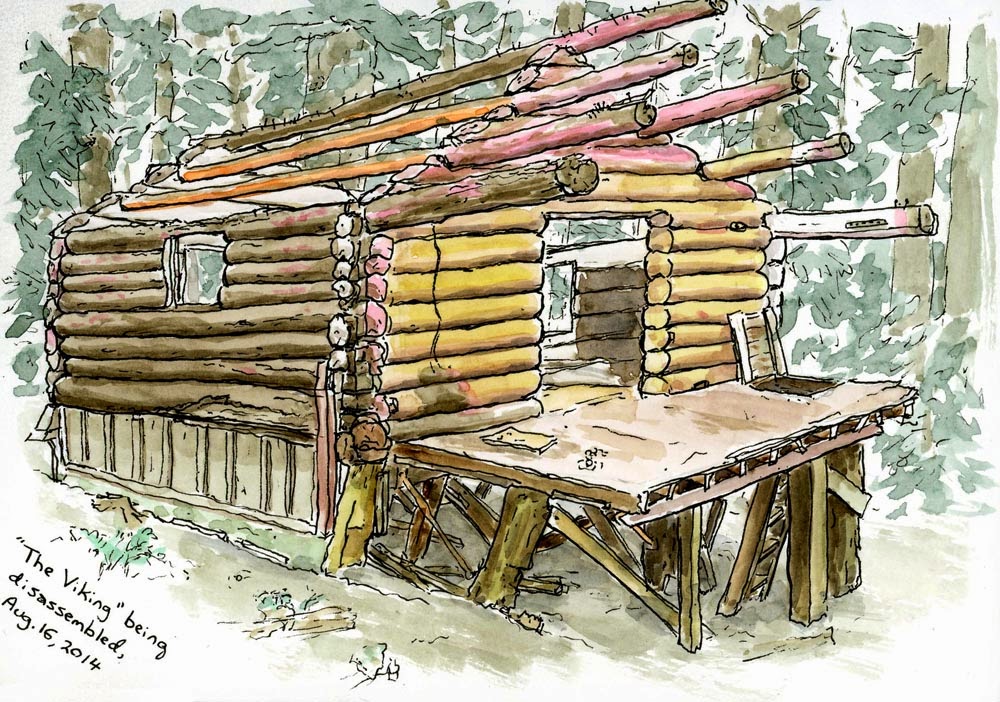 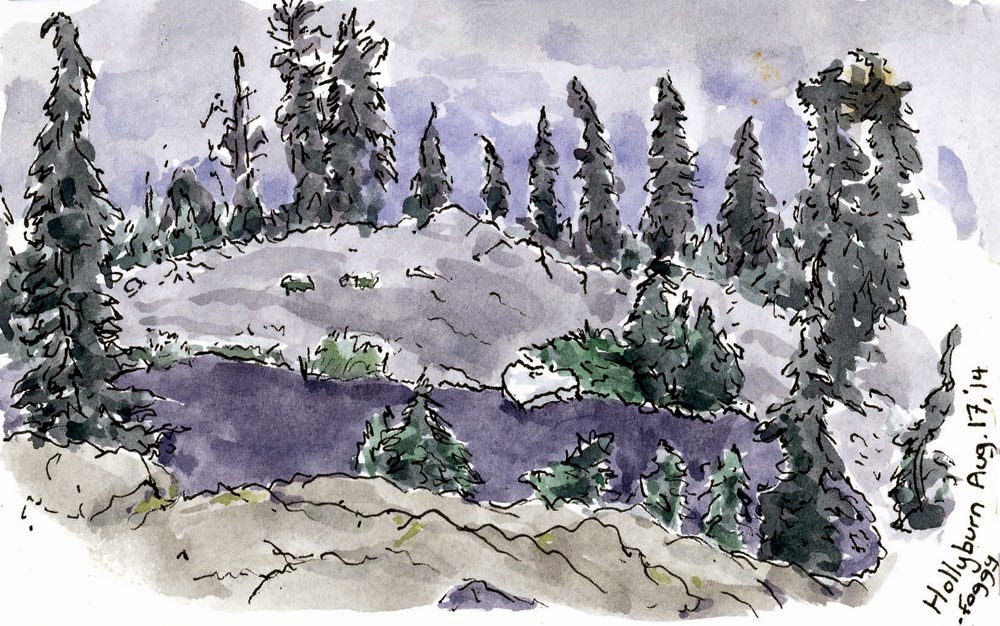 The Q at Lonsdale Quay is a prominent feature of the North Vancouver waterfront.  It would probably be really annoying if you had a thing against Q's.  I don't, but I had still never drawn it before today.  I went down to the adjacent pier to do a painting in the "Realistic Abstract" style: based on a real scene, but with much of the interest coming from the paint itself - the shapes, colours, patterns, composition.  It was an immediate disaster - a crumple-up-and-throw-in-the-ocean disaster (except that I took it home to the well-used crumpled-up-paper recycling).  So I reverted to my pen-and-watercolour standard.  Then at home I tried again for a more abstract version based on my memory of the scene.  It's much simpler, but still far more to the "realistic" end of the scale than I intended (except for the horrible white "reflections" in the water).  Practice, practice, practice... 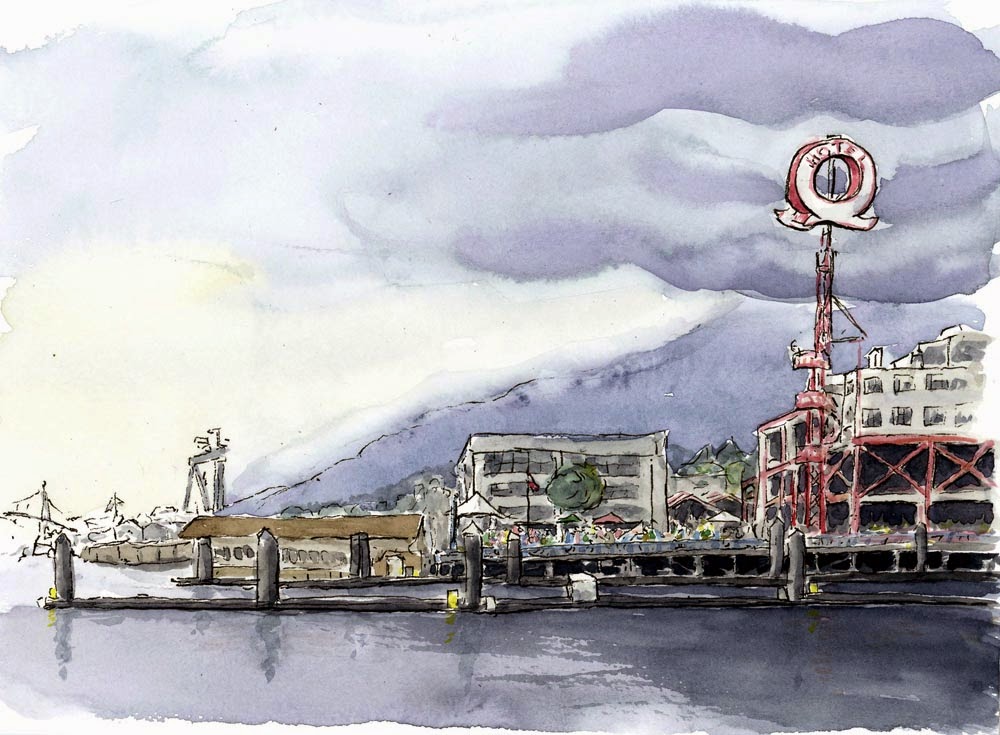 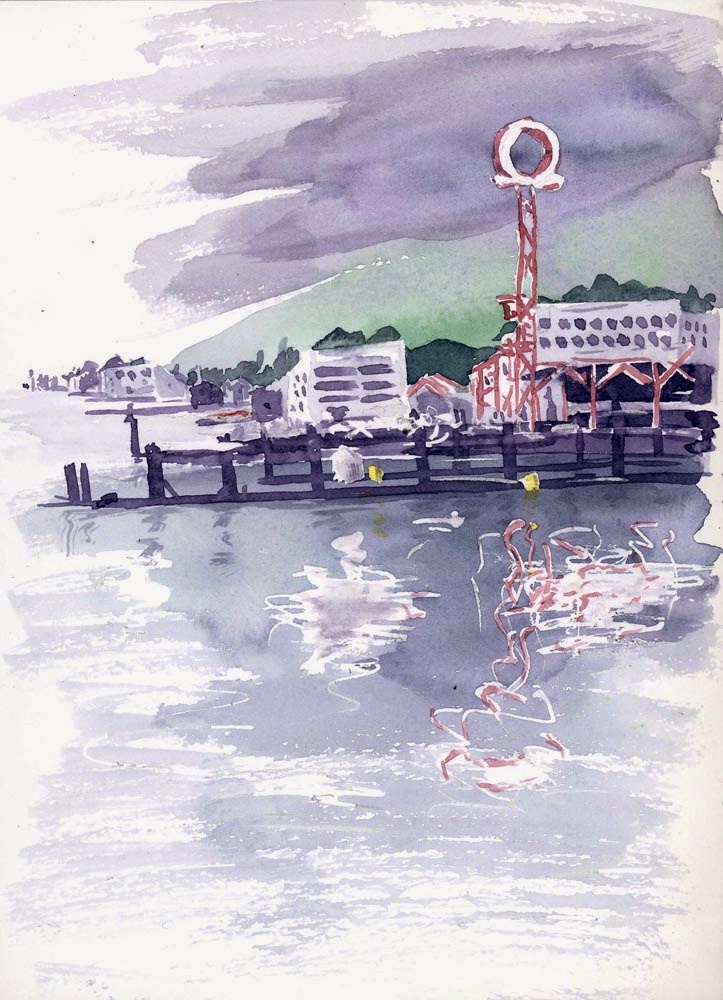 Back to Seton Portage for a few days.  This time I tried to do all my sketches in paint, or at least starting with the paint and only adding pen lines if I felt desperate.  I was concentrating on values - the darks and lights that make paintings convincing, and which I often make wishy-washy when I'm colouring in pen drawings.  They range from 20-minute to 1-hour efforts.  And then a quick value-scribble of the setting sun with my pen, which was feeling neglected. 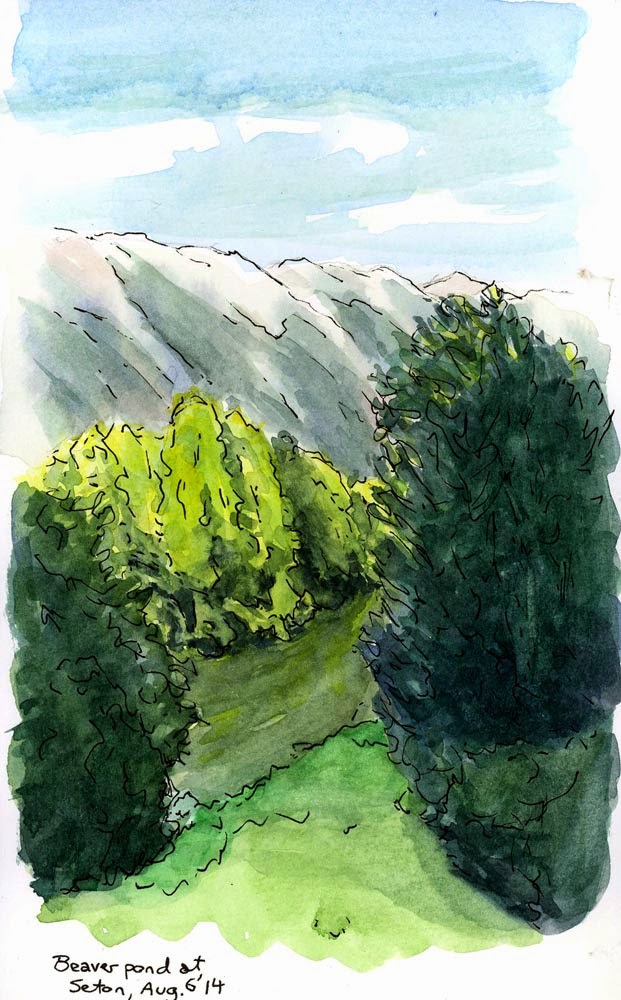 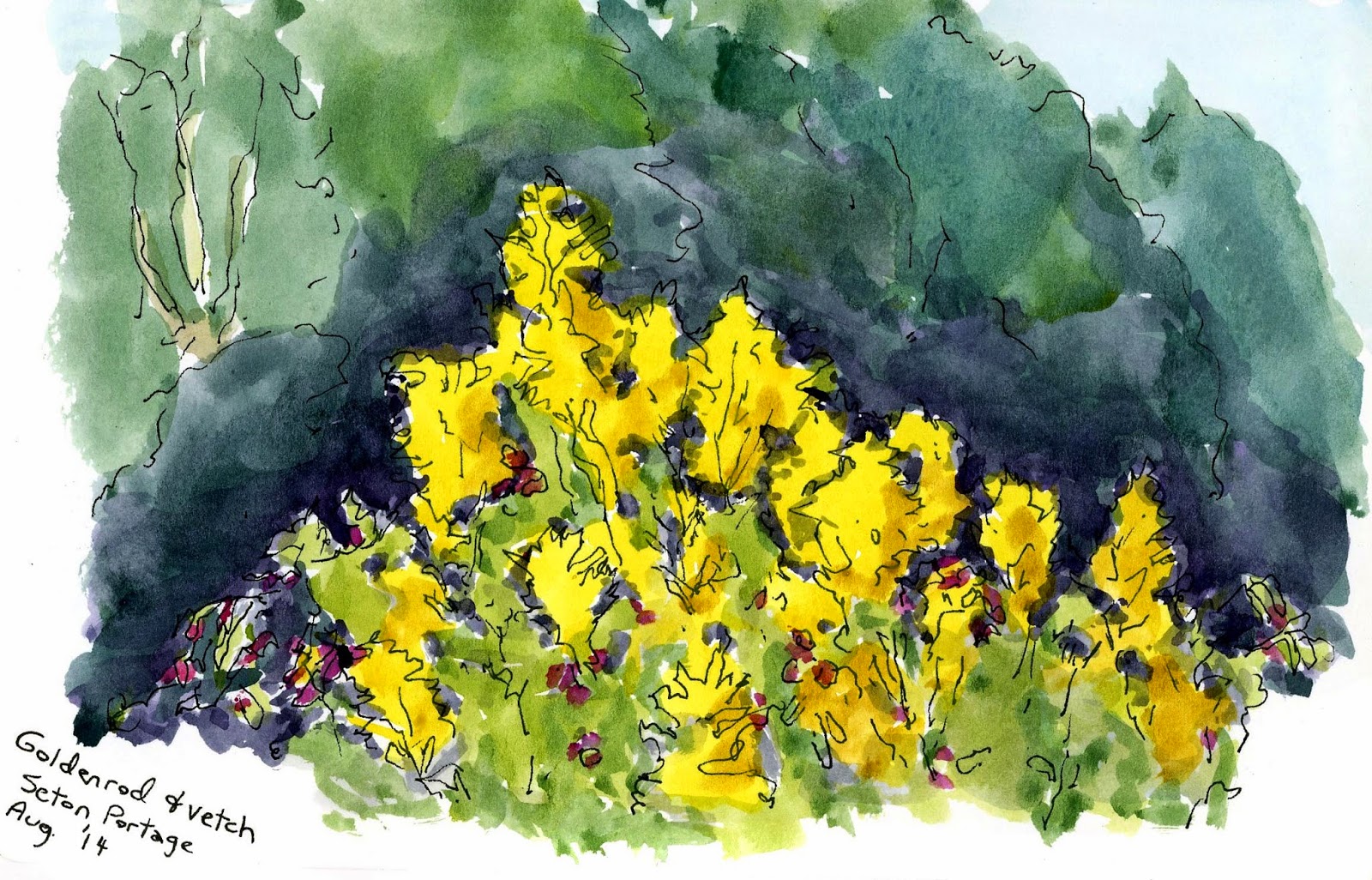 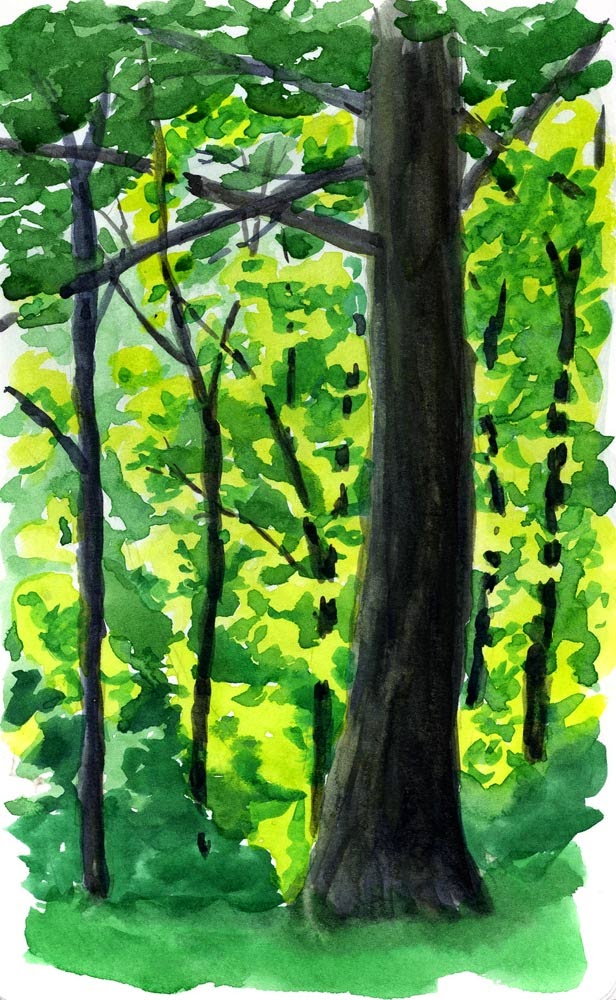 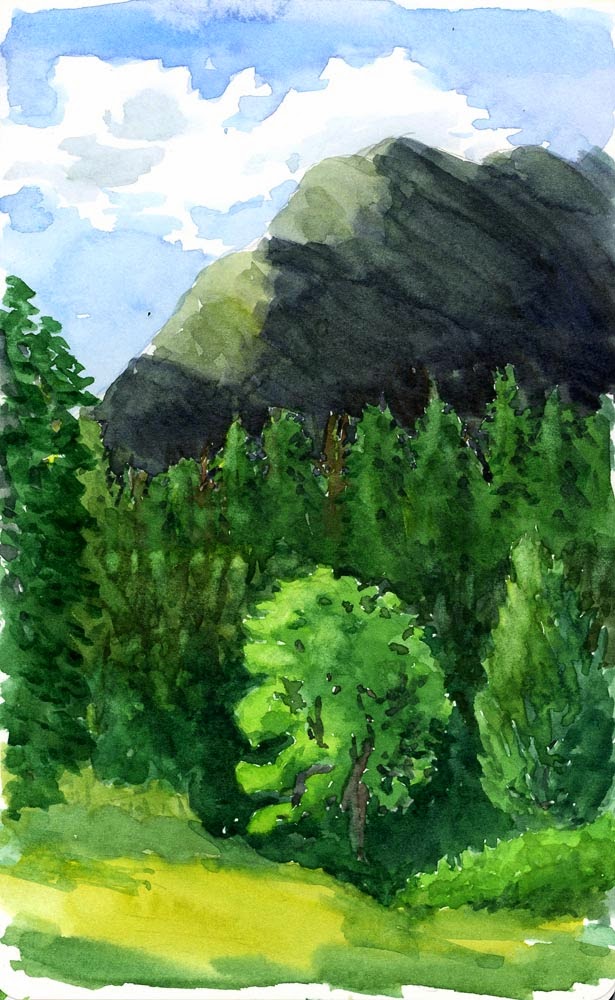 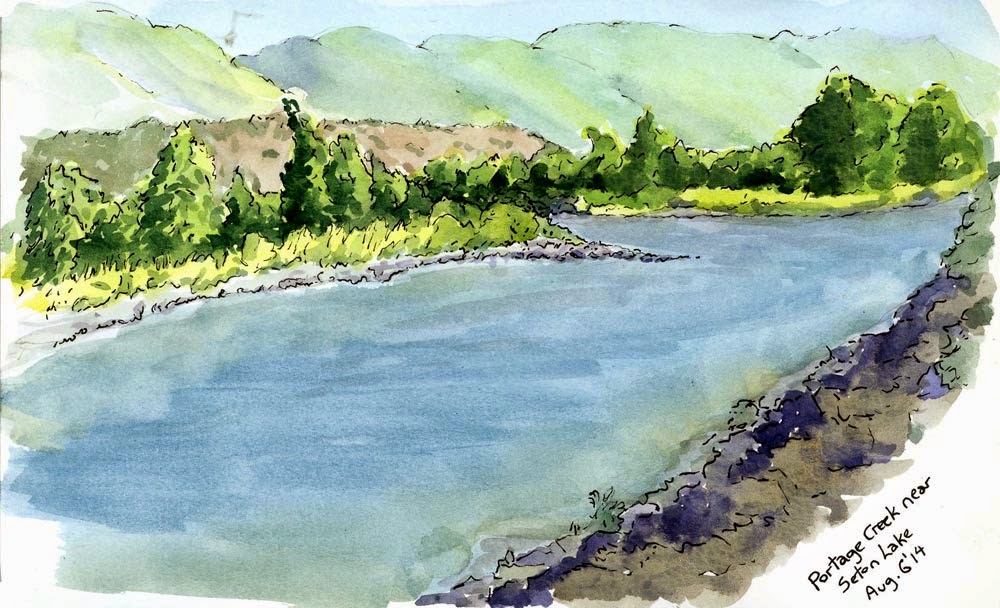 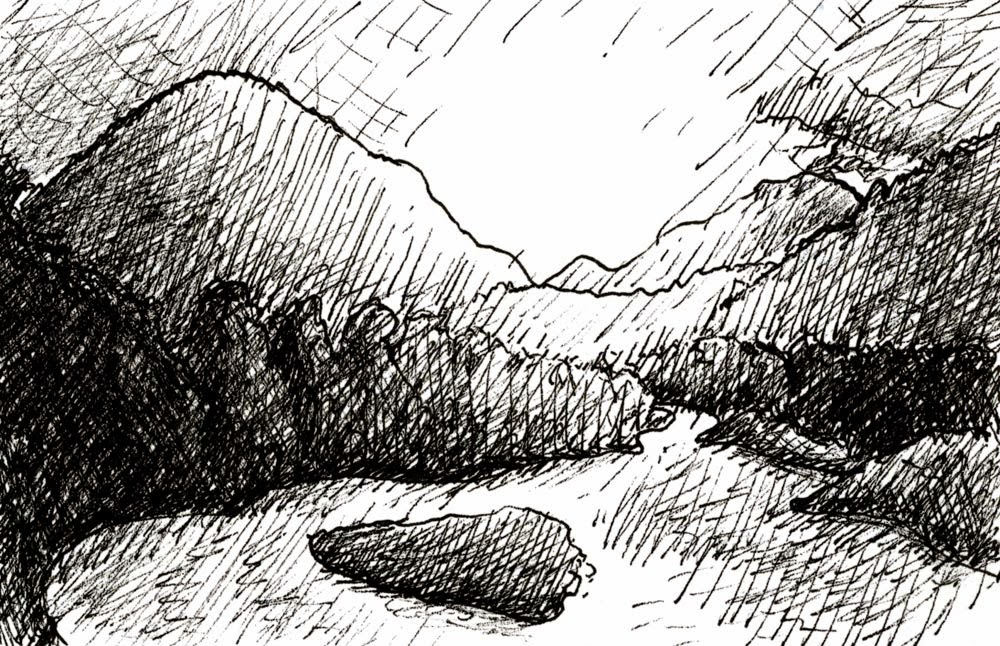 I've been trying to learn to do a bit more with watercolours than just colouring in the lines on ink drawings.  One source of inspiration is Kees van Aalst's book "Realistic Abstracts".  I did the first painting below sitting on the front porch.  It's not specifically a scene I could see from there, but just elements of trees, shrubs, houses (the purple one is down the street, the gambrel roof is from a cabin we're designing), distant mountains, various random shapes.  It looks to me like a misty morning in some wooded countryside.  But I've got a long way to go with that style.

The second painting is loosely based on a photo from Montreal, done with just three primary-colour paints following an exercise from Shari Blaukopf's workshop.  I also just put in some colours where I thought they would look nice.  It was remarkably hard for me to do that instead of always trying to use the colour to describe some thing.

The last is my more standard pen drawing looking down at some pilings at the waterfront, but instead of trying to paint the water in a detailed analytical way, I just did a big wet wash of the warm tan colour, and dabbed in blue to make darker grey or blue patches.  I think it gives the impression of the muddy inshore water reflecting some sky and catching the sun on a hot summer mid-afternoon.  And it took no time at all, which is a bonus! 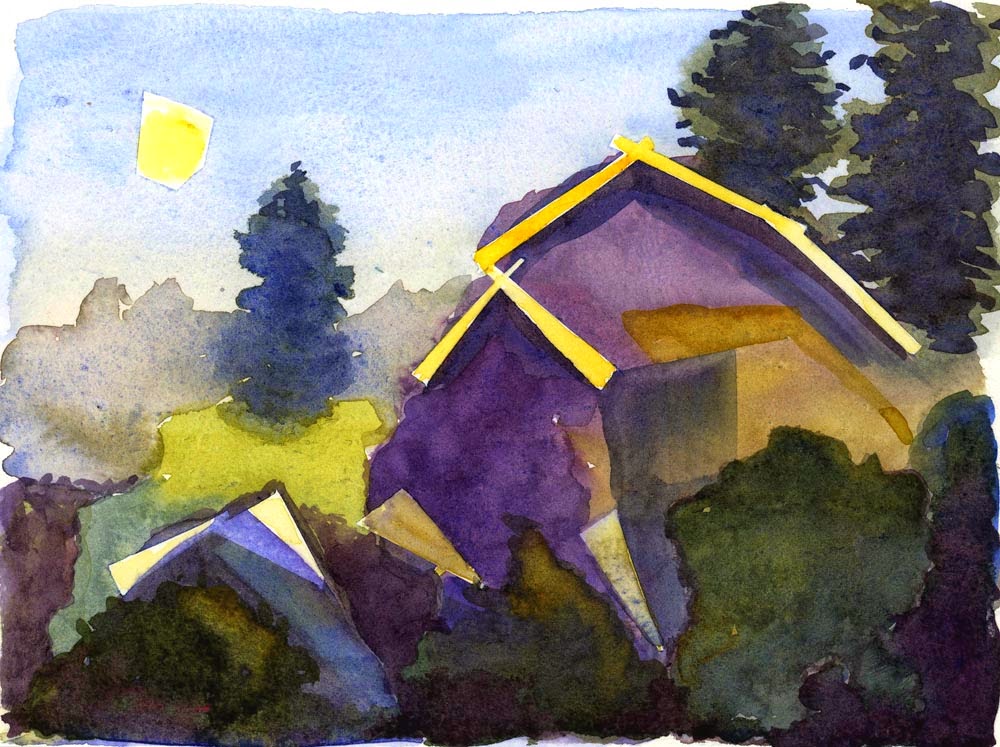 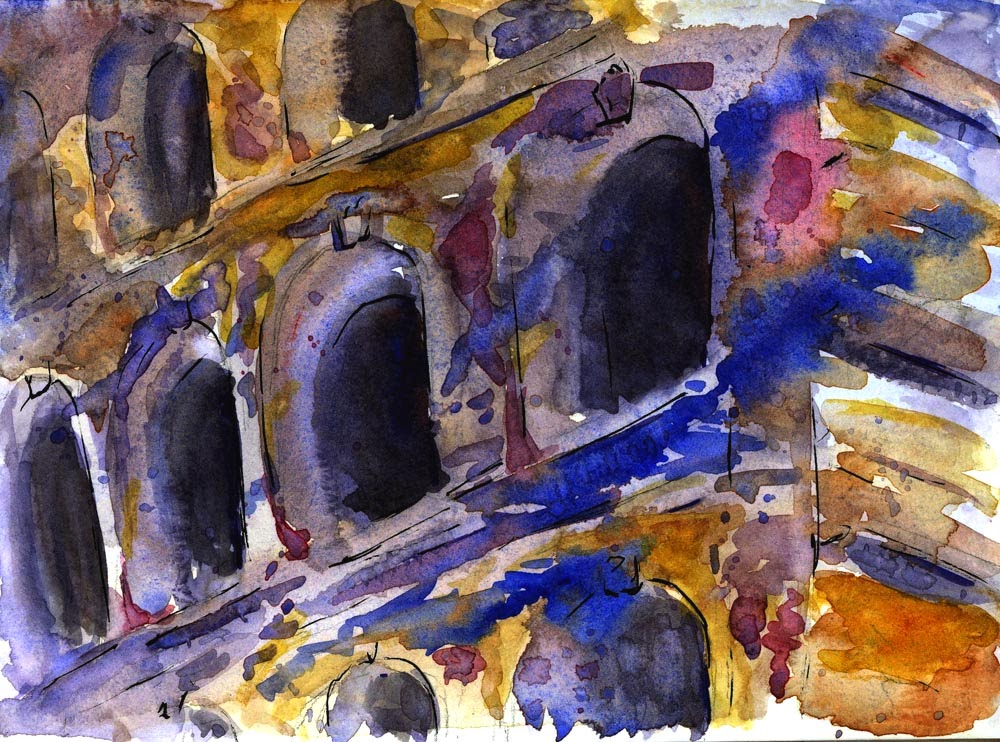 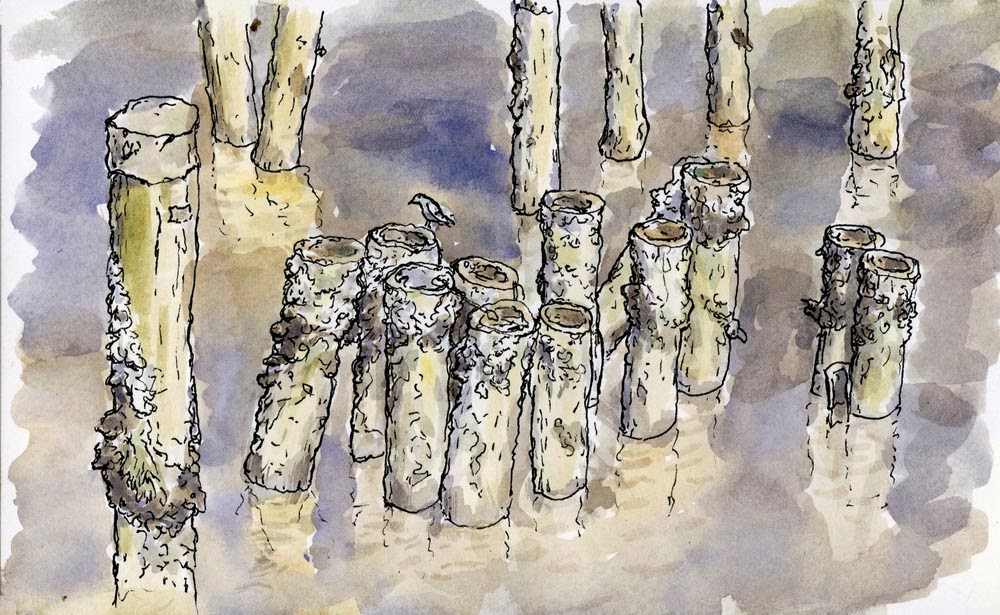