I went Christmas shopping in a certain nefariously seductive art-supply store.  Being generous, I bought myself several presents.  One was a blue pen - perfect for drawing the cool-blue winter-wonderland of Hollyburn mountain, where I happen to be spending much of my holiday week:

An adolescent hemlock, curling up to sleep in the ever-deepening snow. 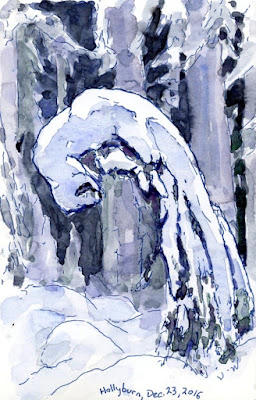 An ice-colour sketch of First Lake on Christmas day.  The paint was freezing on the page in about 3 seconds. 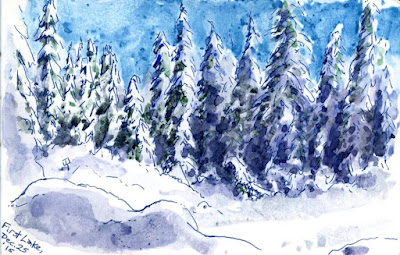 A crew building an igloo (our guest-house) in a snowstorm.  The igloo is actually quite a bit bigger than this, but composition won out over strict architectural accuracy. 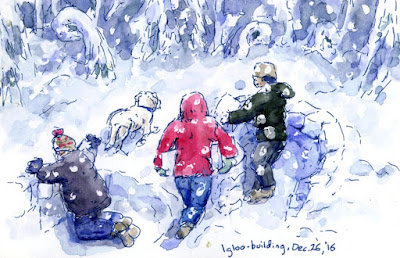 A neighbouring cabin, bearing its roofload of snow well.  While I painted this, a snowshoe hare came up to about 2m from me, sniffing the air because it knew that something was wrong, but not recognizing a human who doesn't move at all for 20 minutes. 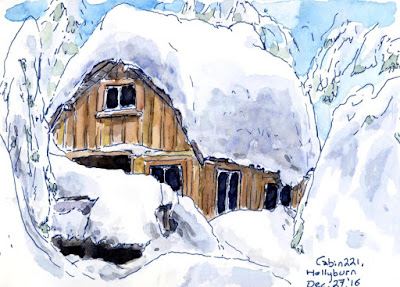 And icicles on the edge of our roof - which is 14 feet above the ground but currently at eye level because of the snowpack. 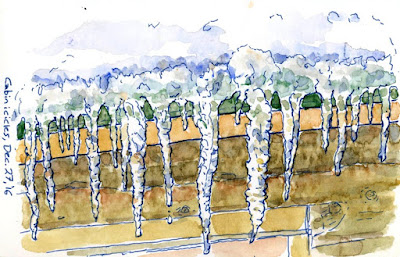 5-minute portraits, mostly done on the seabus (two per 12-minute trip). I do these with a Lamy Safari pen filled with J. Herbin "Perle Noir" ink.  It's water-soluble.  I use a wet brush later to pull the lines into washes.  And to try to hide the lines that went wrong. 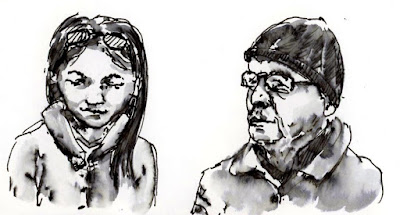 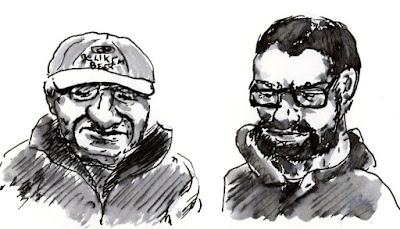 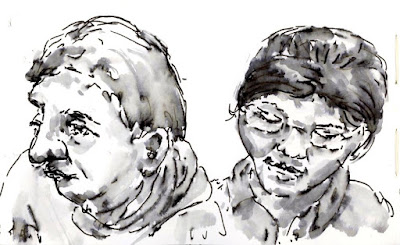 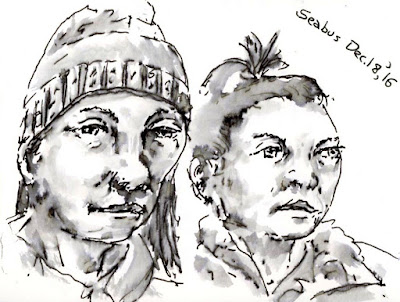 Several years ago, we came home on a snowy afternoon to find a varied thrush crouched in the narrow patch of  bare ground between the house and the deep snow.  He was clearly down to his last reserves and couldn't even hold his wings up.  I tried to catch him to take him inside, but he could hop just enough to stay away from me.  I ended up herding him towards the snow under the bird feeder, where I had spread some seeds for ground birds.  He huddled there miserably until dusk, after all the other birds had gone to roost for the night.  I knew he would never make it through the night, so I tried to catch him again, but he hopped away and ended up hidden in my woodshed.

With the long cold night, I was sure that was the end of the bird.  But the next morning at first light he was under the bird feeder, slowly picking seeds out of the snow.  He stayed there all day, never flying up into the tree like the other birds.  At dusk, again long after the other birds had sought shelter, I saw him fly off, barely getting off the ground and clearing the fence.  Again, I didn't expect to see him again.

But the next morning, there he was feeding with the other birds.  This time he sometimes flew up with them into the tree and sat in a pale sunbeam before fluttering down to feed again.  By the fourth day, he was feeding like a normal bird, pecking seeds on the snow, flying into the tree when the flock spooked, and resting in the sun.

On the fifth day, I was working at my desk when I heard an unmistakable sound - a varied thrush singing.  He was in the top of the tree, mid-winter, but singing like the first warm day of spring.  He ended up staying all winter.  We have a varied thrush at the feeder every year now, especially on snowy days.  I know about bird life-spans, but still, I like to think it's that same bird that a few seeds saved from that winter storm, and who lived to sing his thanks. 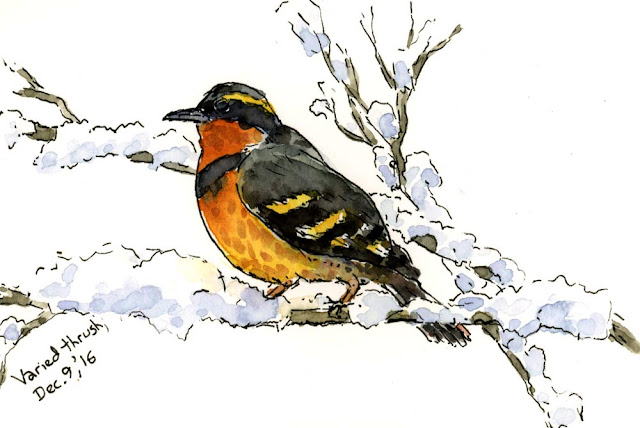 Snow is a rare thing in Vancouver, challenging and confusing - for birds, for drivers, for worried weathermen, and for flowers that heard how early spring comes here and were misled by that one warm sunny day last week. 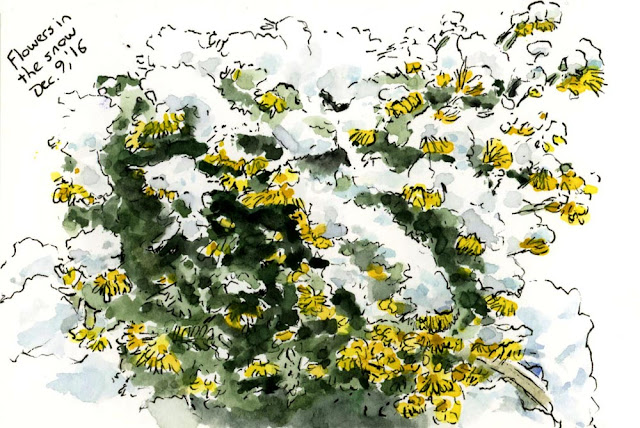 Even the skinny-jeaned baristas have to switch from making immaculate swirls on low-fat decaf soy-milk lattes to battling the snowy elements.  It's a tough job, requiring strength, dedication, perseverance and colourful Gore-tex.  Unfortunately, this one outside the local cafe succumbed.  It's sad, but it's Nature's way of thinning the herd and making space for the next generation of cafe workers that will spring up almost as soon as the snow melts.  And we can take solace in the fact that nothing is wasted in Nature's economy - the scavengers and decomposers rely on the toll of the harsh winter as much as we rely on those lattes.  (Actually, the cafe guy survived.  He was joyful to get outside and play in the snow, and he probably got a free espresso for his efforts.) 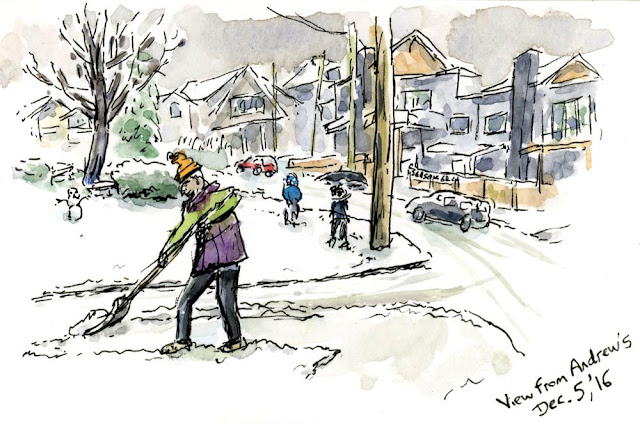 I haven't been out sketching too much this past month - this cold, rainy, dark month - but I did manage to find a sunny'ish relatively warm day for Lonsdale Quay, a lovely snowy one for the first cross-country ski of the year and a view of the rebuilt Hollyburn Lodge, and any-day-is-fine for working on my (languishing) career as a beer illustrator. 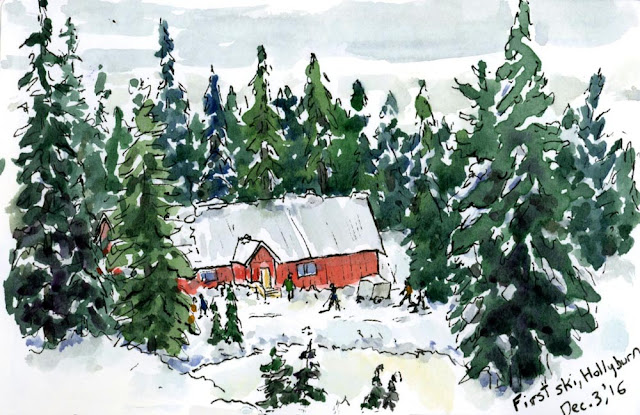