The Polygon Gallery opened this weekend on the waterfront in North Vancouver.  It is a major upgrade on the old Presentation House gallery, retaining the focus on photography.  The building is interesting architecturally, with a glass-walled lower floor and the gallery upstairs, where a series of triangular roofs give a visual nod to the North Shore mountains while letting in natural light from the north.  A second-floor atrium and balcony give views of Lonsdale Quay, the harbour and the city of Vancouver.  Most importantly, the building provides a beautiful space for the art, without shouting "Look at me, I was designed by an architect!"  In a place where we often sit around lamenting better things that have been replaced by condominiums, I think the gallery will be a very positive addition to the city.  Here is my quick "wet-on-wet-in-wet" impression (it was pouring rain). 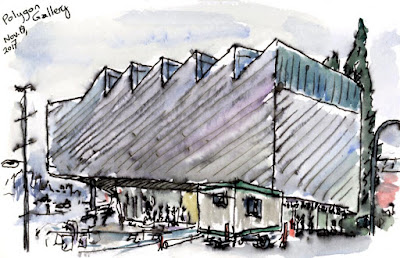 The opening exhibition focuses on North Vancouver, with an appealing mix of photographs - some historical, some from the contemporary photographers that Vancouver is most famous for in the international art world - and sculptures and weaving, much of it from local First Nations artists.  A huge light-box photo by Rodney Graham is one of my favourite local art works.  It's visually very attractive, and has layer-upon-layer of interpretations (at least, I think so - I don't know what the "official" story is!) 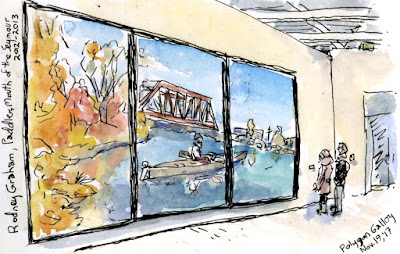 The sculptures are a happy addition for sketchers, more fun to draw than trying to make a picture of a picture.  I was joined by a couple of knee-high future artists drawing Gabrielle L'Hirondelle Hill's quirky piece made from parts found in the historical shipyards nearby.  And I appreciated Cameron Kerr's large yellow-cedar sculpture representing a central element of North Vancouver culture - a bridge on the highway. 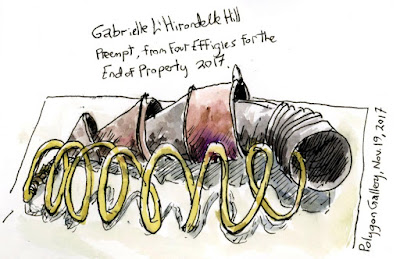 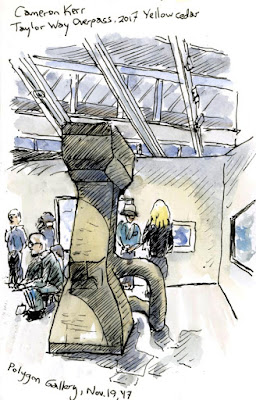 Corsica V: Mountains, and a bonus

Our last day in Corsica was spent crossing the island, winding up one side of the central mountains, and winding down the other.  And regretting not having far more time there, for the whole country but specifically for the several beautiful gorges with long hiking trails.  The trails were fairly old - some of the recent upgrades were done by the Romans.  This bridge near Ota wasn't quite that old, but was an amazing piece of stone work, a slender arch less that two feet thick spanning a large river, and strong enough to support countless mule trains over the centuries. 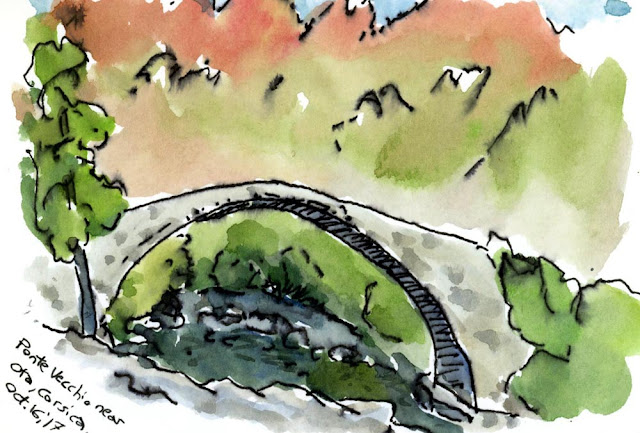 The higher mountains had forests of pines, other conifers and some deciduous trees showing fall colours, with soaring granite cliffs behind them.  They looked like Yosemite or other parts of the US southwest.  Right near treeline were some huge, weather-beaten Corsican black pines that I had to add to my sketch collection of Really Big Trees of the World. 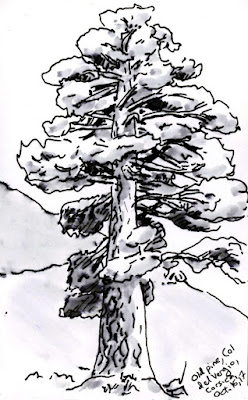 Overnight at an olive farm surrounded by grapefruit orchards near Bastia, then back home.  I didn't get any drawing done while negotiating the metropolis of Charles de Gaulle airport in Paris, but I did get this one quick sketch in of our IcelandAir landing in Reykjavik - huge storm waves on the North Atlantic, the dark coastal rocks and green tundra.  About as far as you could get from the sunny turquoise Mediterranean in a few hours' flight... 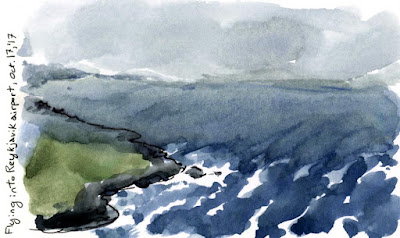 Corsica IV: Piana and the Calanches

Back to the coast, we stayed a couple nights in an elegant hotel from the early twentieth century.  Les Roches Rouges in Piana was the place to be in the 1920's, but was abandoned for several decades.  It is now being resurrected, and has an appealing decayed art deco Jazz Age vibe - it is a pretty fine place to be in this century too. 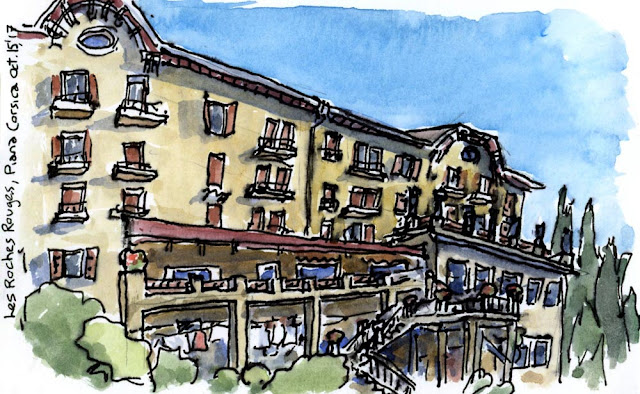 Like most places in coastal Corsica, there's a beach.  No aggressive cows here, but there was a large herd of goats to navigate by on the winding road from Piana.  And - unusual in our experience on Corsica - there were other people on the beach.  Nine of them, to be precise (I counted).  One of the 16th-century anti-pirate guard towers dominates a rock outcrop in the background. 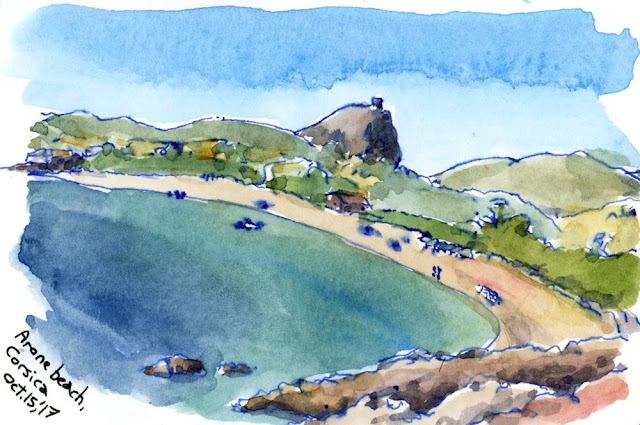 A main attraction in the area is the Calanches, a range of jagged red mountains eroded into fantastical shapes.  We climbed way up into the alpine, seeing only one other person - a Corsican hunter who pointed out the best trails, speaking in Corsu, which is a surprisingly understandable medieval form of Italian with some French thrown in.  We did a bit of scrambling up some small peaks, where the eroded stone made ridiculously easy hand- and foot-holds.  I sat on top of one outcrop and drew the rock formations, one of which looked either like a French aristocrat or mating cows, depending on your point-of-view. 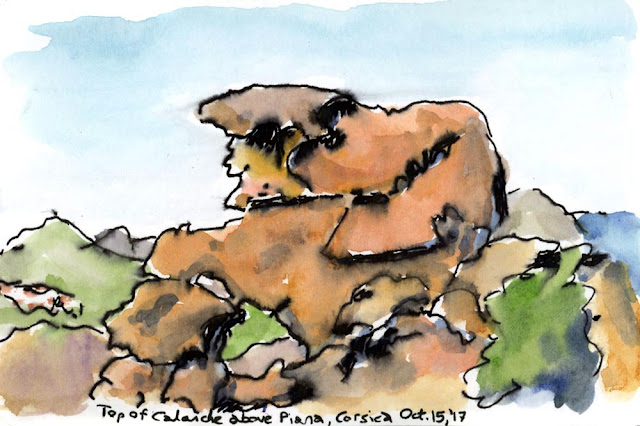 Along with the coastal fishing villages, Corsica is also covered in a scattering of hill towns.  A few hundred people cluster together in a dense ancient settlement, largely surrounded by forest.  In Pigna, the thing to be is a luthier, although potters, music-box-makers and other artists and craftspeople are popular choices too.  There is also at least one good cook, as our al fresco lunch featuring wild mushrooms showed. 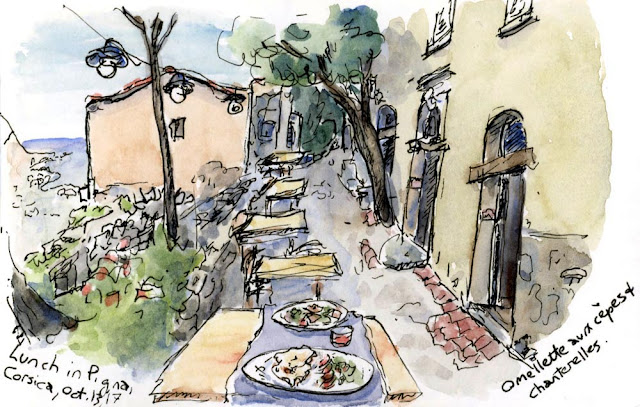 The lower hillslopes also have vineyards, including about 20 small family wineries in the Patrimonio region.  We did a quick tour one afternoon, then had a picnic of wine, cheese and bread on the pier in St. Florent. 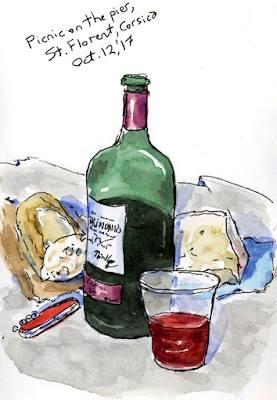 We spent one night in one of the higher towns, Speluncato, which wraps itself around a rocky outcrop, surrounded by bigger mountains.  It was a cool autumn late afternoon when we got up the long, winding and narrow road to the town, with the clouds hanging on the nearby peaks.  Kids were playing "spy" in the piazza, complete with walkie-talkies, and were delighted that a foreigner showed up and engaged in clearly suspicious behaviour involving a notebook and something cleverly designed to look like a watercolour kit and brushes. 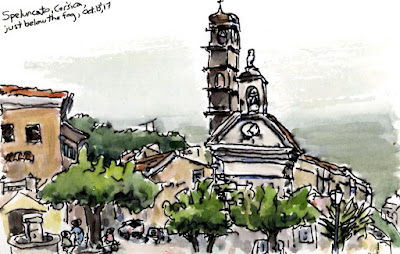 The next morning was brilliantly sunny, perfect for hanging out in all the little nooks and crannies in the centuries-old laneways.  It's a pretty quiet place - passersby were two cats, and one old dog who also thought I was suspicious, until he decided that he was more sleepy than suspicious and had a nap at my feet. 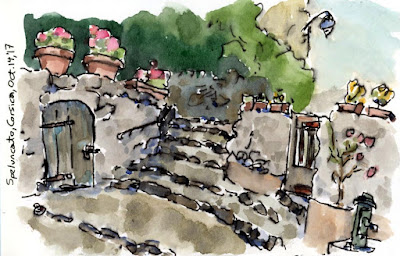