The end of the Victory Ship

The Victory ships were built during World War 2 as fast cargo transports, made quickly to replace ships lost to u-boats.  The ship yards in North Vancouver produced 164 of them, a major contribution to Canada's war effort.  This is the last part of the last one, the stern of HMS Flamborough Head.  It was saved as the centre piece of the National Maritime Museum on the waterfront beside Lonsdale Quay.  A propeller from a sister ship was purchased to replace the lost original.  The only problem is that the museum was a co-operative project of the federal, provincial and municipal governments and private developers.  You can imagine how well that went.  In contrast to the effort of thousands of men and women who produced each ship in less than 100 days, this last piece of that history has sat rusting in a weedy vacant lot for years, partly covered by industrial strength Saran wrap like a forgotten left-over, a monument to government inability to get things done.  Even the weeds are failing to thrive. 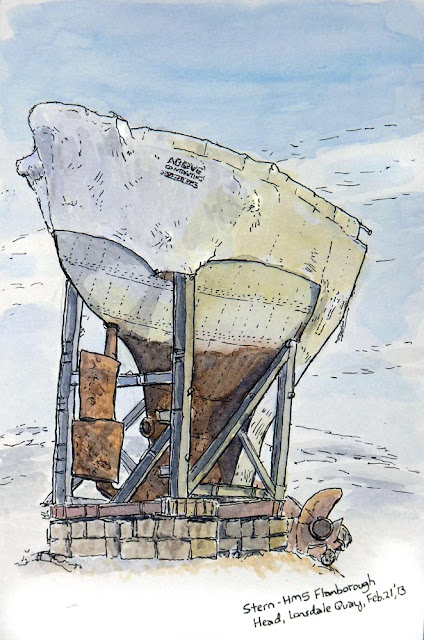