Everybody knows that November in Vancouver is cold, rainy and dark.  It's a main reason that embarrassed citizens of a certain large city in central Canada don't all flee here.  But fortunately, like many things that everyone knows, it's not true.  Or at least, not completely true.  Below are 6 drawings from Vancouver in the middle of November:
November 11, warm and sunny, thankfully for the remaining vets who didn't have to stand in a freezing drizzle.

November 12, socked in rainy, until just before sunset, when the sun dropped below the clouds and lit up the whole world in a way that makes you forget the rest of the day.  I call this a "redemption sky", used with exactly that meaning in the play Life After God by Michael MacLennan and Douglas Coupland, set right here on the North Shore.  It happens a lot, as it often clears up first over the ocean to the west. 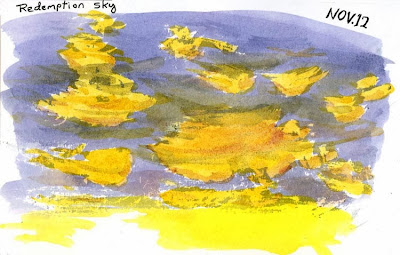 November 13. Sunny, calm morning at the local tidal flats (although I had a bit of a Hitchcock moment when I looked up to realize 50 crows had flown silently into the tree right behind me as I drew.  They had a hungry look...) 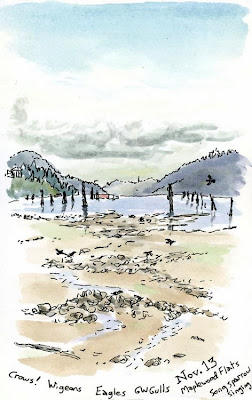 November 14 was a draw-inside day, and November 15 was mostly worse.  But with a house that colour, who needs sunshine? 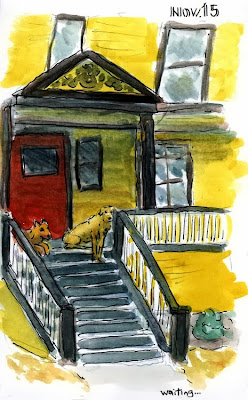 November 16 and 17 were cold and overcast but not raining for the East Vancouver Culture Crawl, which I modified on the Sunday into the West Vancouver Swamp Crawl, because of a reported rare bird.  It was a no-show, but I actually like standing around in swamps, amusing the local chickadees and passing soccer moms who all thought I was daft. 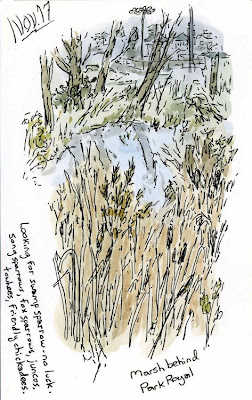 November 18 was bit forgettable, but today was sparkling clear, with a cold dry northern wind - perfect for a quick sketch of the view from the shelter of the front porch. 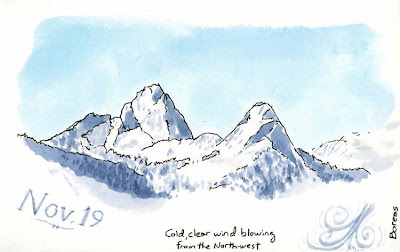