Some small people drawings from the last few days.  (The drawings are small, not the people.  Some of the people were very large indeed.)  First, in transit to the airport - a lady with a developmental disorder, who flashed through emotions as rapidly as the rest of us, but was honest enough to display them; and people with hats, including hats on top of hats. 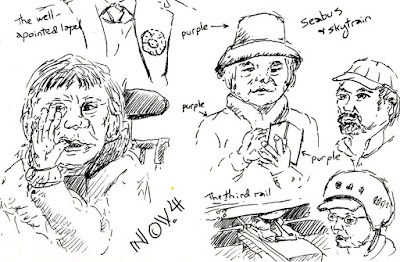 At the airport, a mechanic trying to fix our plane.  I'm sure he was very good at his job, but he didn't look it.  In the end, they had to find another plane.  Being a bit tired of airports, I was at a loss for anything to draw to fill the time, until a troop of Buddhist monks showed up.  The young monks were attending a venerable elder monk, and taking occasional there-is-no-selfies on their phones.  That's the thing with sketching in public - when you think there's nothing to draw, a troop of monks will always appear, metaphorically or otherwise. 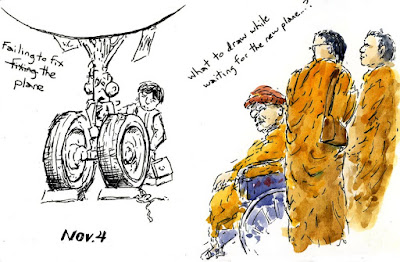 Then people hanging out at the Starbucks at the Chapters in Edmonton.  Everyone there seemed just a little bit outside of the normal range of standard humanity.  I fit right in.  (I like the way the big circular feature in the roof looks like a cartoon "thought balloon" in the drawing.  But what exactly are they thinking...?) 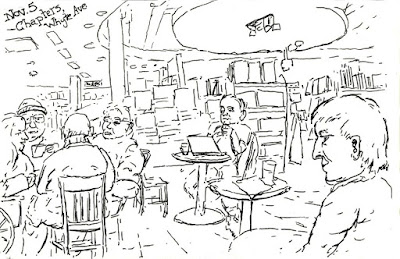 The table next to me at dinner had two chatty church ladies, no doubt as devoted as the monks to their faith. 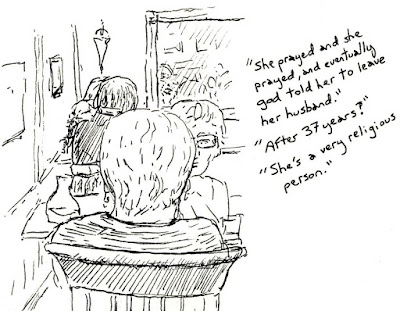 On the seabus home in dark rainy Vancouver. 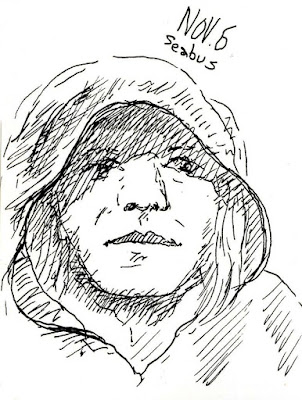 And a postscript: My hotel in Edmonton has complimentary wine and cheese tastings, and, on Thursdays, miraculously, chocolates.  A little dessert can cure a lot of the indignities and disappointments of travel. 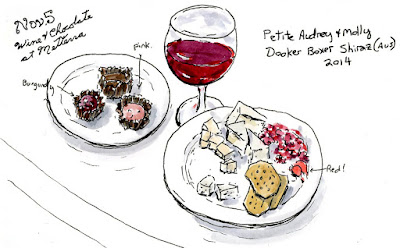