I fit a lot of drawing into the first long weekend of the summer.  I started with a ride up the Seymour River, an annual trip to see some birds for my yearly "NMT" (non-motorized transport) bird list.  When I was there last year - the first person in the morning up the bikes-only road - I was coming down a long hill and slowed for a speed gate (put in to avoid head-on collisions among cyclists).  Just ahead, I saw a big black bear feeding on the side of the road.  This year, I was passing through the gate thinking how grateful I was that it had prevented me from zooming down the hill right into the bear, when I looked up and saw (the same?) very large bear about 40m away.  He stared at me for a few seconds until I gave him a loud "Good morning, bear!", then he turned and ran down the road into the forest.  There's a lot of power rippling through those creatures when they run!  I drew the surrounding valleyside from a bear-free picnic area, serenaded by a MacGillivray's warblers, one of the birds I was looking for. 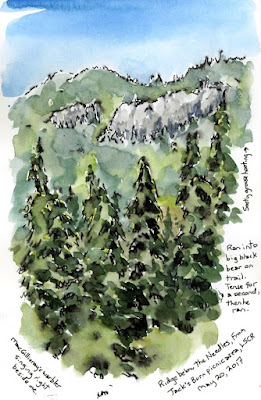 Back home, the garden is blooming on a compressed schedule after a cold wet spring, juxtaposing flowers that normally bloom at different times.  I carefully composed the white poppies in this drawing, then, annoyingly, forgot and painted one azalea-purple.  There's no going back with watercolour... 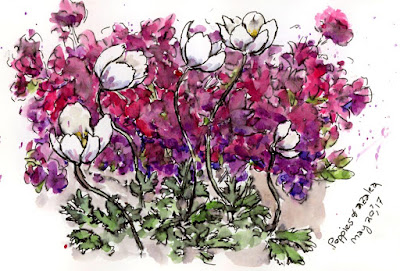 The next morning I went down to Maplewood Flats, where a passing boater had discovered why they are called "Flats".  The tide was still going down, and it looked hit-or-miss as to whether the boat was going to be lying sideways on the mud-bar when the tide came back in. 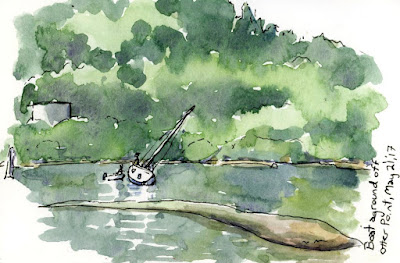 Then I rode over to West Vancouver and an UrbanSketchers' meetup at the Ambleside Artisan Farmers' Market.  It's a happy mix of busy market - more artisan than farmer at this time of year - the beach with many weekend loungers-about, and a few food trucks, including new-for-me Burmese food - tasty! 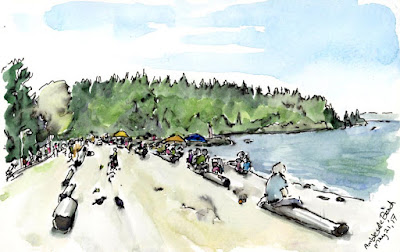 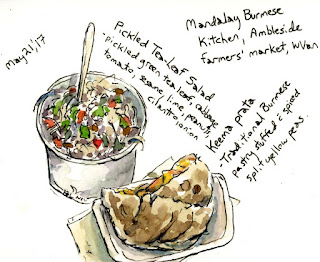 And finally today, the buy-two-get-one-free day of the weekend, I skied up Hollyburn Peak, where there was still a good 4m of snow, even though the temperature was getting up towards 20C.  I've drawn quickly in the past because I was cold, or hot, or about to get soaked or eaten by bugs, but today's motivating force was a UV index that must have been off scale up a mountain with clear skies in late May and a bright white snowpack.  I also made a stop at First Lake by Hollyburn Lodge, where the inky-black water is starting to melt pathways through the still-deep snow. 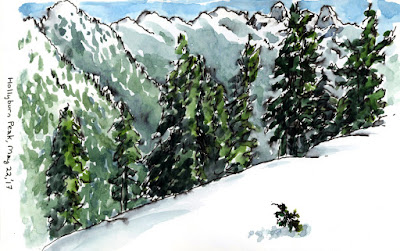 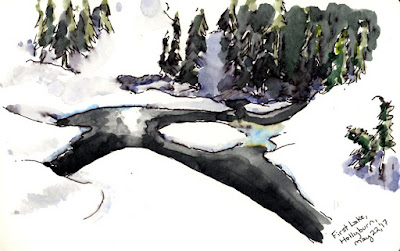