I got to spend a 5-day weekend - my company is thinking of making those standard policy - in the Tucson Arizona area as an "accompanying person".  The winter weather is perfect for us northeners, for hiking in the desert, bird-watching and desert botanizing.  With, of course, a few quick sketches along the way.

First, a brief stopover in the Los Angeles airport on the way down: 10 minutes to try to catch the spectacularly southern-California colours at dusk. 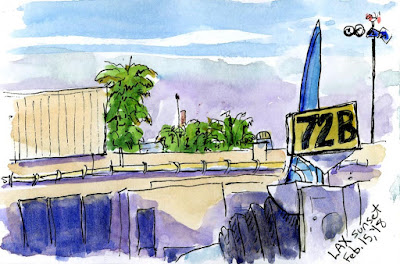 Finger Rock Canyon was just down the road from where we stayed on the outskirts of Tucson.  It's one of those devious walks that makes you want to check out what is just over the next bump, or just around the next point, until you find you've climbed the entire mountain and are left wondering if your legs will survive the trip down.  The rock strata are all tilted appealingly, and that day the clouds were marching along in parallel. 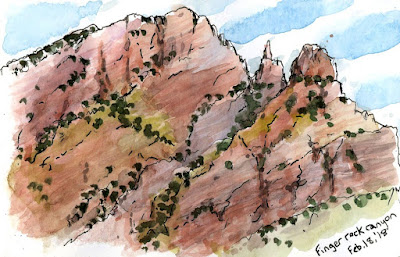 Kartchner Cavern is about an hour out of Tucson, and is one of the wonders of Arizona. (It would be the wonder, if it wasn't for that little canyon thingee in the north of the state).  You clearly enter a different planet, if not an entirely different universe, when the guides escort you underground through the multiple entry doors.  The level of concern for protecting the cave environment is wonderful, and that includes not allowing any objects into the cave - no cameras, phones or even sketchbooks.  If I had had a sketchbook, I would have been far too awestruck to use it anyway.  But I did get a quick sketch of the surrounding countryside while waiting for our tour. 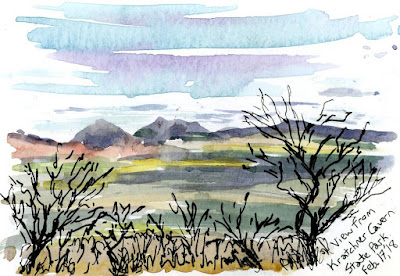 I hiked in Sabino Canyon park on US President's Day, when entry was free and there were at least a thousand people in the park.  But with recent rains, Sabino Creek was high enough that it took some agile rock-hopping to cross, and I ended up seeing all of two other people on the far side of the creek.  It was a blustery day, with clouds flying by in the wind, and my paints almost flying into the creek at one point. 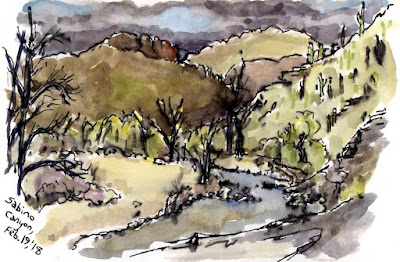 The city itself would be great for sketching if you lived there and found all the little details of urban life in a gritty desert environment.  Or if you really liked suburbs and shopping malls.  But it was challenging to find anything definitive to capture the place in my quick fly-by tour of the downtown area.  I settled on a cheerful and fairly humble "mansion" in the small area of the El Presidio neighbourhood that retains some of the older buildings in this not-very-old city.  The Cheyney mansion from 1905 is not quite as wobbly as I drew it - I blame a strong and surprisingly cold wind, and the incessant roar of fighter planes flying over the whole time for adding a bit of hurried "looseness". 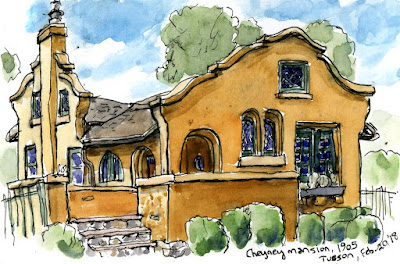