Our Lady of Perpetual Cacophony

Holy Rosary Cathedral - built in 1899-1900 and "Vancouver's best example of Gothic Revival architecture" - looks peaceful behind the cherry trees of the adjacent public plaza, except for the thing I couldn't draw -  the noise.  The noise!  The abominable, bombillating, clanging, discordant, ear-fracturing noise of the bells! They managed to be completely random and annoyingly repetitive at the same time.  There are bad bells, there are awfully bad bells, there are human-rights-abuse bad bells, and then there are the bells of Holy Rosary Cathedral.  The homeless man trying to sleep on the bench opposite me had his hands clamped over his ears, until he finally gave up and went running away crazily.  The only possible theological reason for such caterwauling must be the auditory equivalent of fire and brimstone - reminding sinners of just how bad things will be if they don't fess up.
Fortunately, I got evicted by a security guard before any permanent psychological damage, because the "public plaza" (as I'm sure it says in the development permit from the city) is apparently only for employees from the adjacent bank tower.  We had a conversation that went: Him: "You can't draw here."  Me: "Yes, I can."  [Ten-minute pause while superior was contacted.] Him "No you can't."  And then that age-old excuse for any irrational behaviour "I'm only doing my job."  But I was done, and thankful to flee. 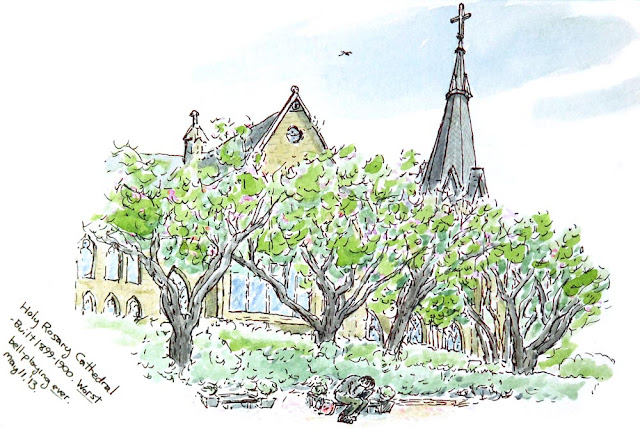 Down the lane way is this construction, which I don't think is in the Gothic Revival style.  Passers-by are in imminent danger of electrocution, because there are three transformers on the platform of rotten boards above the powerlines.  Add it to the list of "Best Vancouver Places Not To Be During An Earthquake". 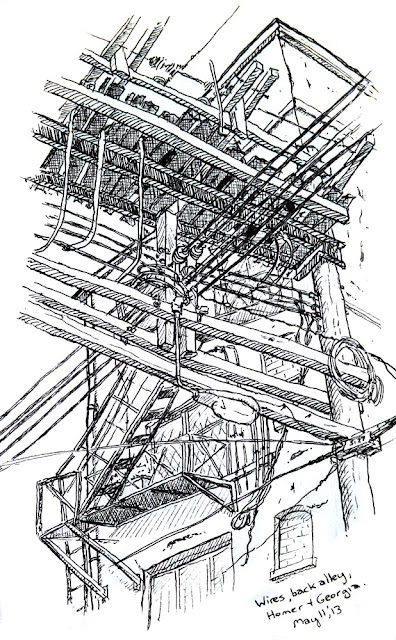