We spent most of our Costa Rica time in two very different areas of primary forest - high-elevation cloud forest and coastal lowland rainforest.  One was downright cold in the mornings, the other was relentlessly hot.  The cloud-forest is dominated by big oak trees, and sometimes looked a little like an eastern deciduous forest, except with epiphytes and vines you could swing on.  In other places, there was a mid-canopy of palms, an understory of fern-trees and long golden fronds of arboreal moss waving in the mist, and it looked more like something from a different planet.  The coastal forest was a straight-up jungle, an impenetrable tangle of who-knows-what - my limited temperate-zone botany knowledge simply gave up and went for a nap on the beach. But one thing they had in common with each other, and with my home town for that matter, was Big Trees.

This cloud-forest white oak is a good 4m diameter at the base.  It had a name - the Centenary Oak, though I'm sure it was older than that - and a plaque from the government in front of it saying that it was a commendable tree. We made a long and very worthwhile uphill pilgrimage to see it, and I paid my respects by sitting in front of it and drawing, just before the clouds moved into its upper limbs.

This buttressed base of a Ficus tree in the lowland rainforest near Carate was also a good 4m across, and those roots are chest-high.  Good things happen when you sit quietly and draw - in this case, the good thing was a tayra.  This is a sleek, beautiful creature in the weasel family, which looks like a cross between a North American fisher and a large black house cat.  It sprang up onto one of the roots, realized I was there and gave me a brief stare of pure predation, then decided it wasn't hungry enough to take me on (it's fiercer, but I'm bigger) and disappeared in a quick leap.  You could spend months running around looking for one of them - or you can just sit and draw... 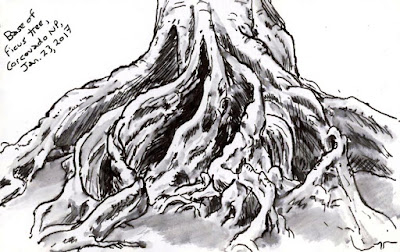 The strangler fig is a related tree that uses a different growth strategy.  It starts out as an epiphyte, growing on another tree.  When it gets big enough, it sends down vines that become roots and then trunks.  Over time, it completely surrounds the original tree, which may eventually die and decay, leaving a hollow wicker basket of a tree.  This one was enormous - it would hold an awfully large wine bottle.