We are just back from a carefully-themed trip to "regions that start with the letter 'C' and have old coastal villages and famous walking trails": Cornwall, Cinque Terre Italy, and Corsica.  With a couple larger towns thrown in for good measure.  So lots of sketches to come...

The trip started in Cornwall, where my partner had a work meeting - and so I had free accommodation and lots of time to draw.  The UK has an incredible train system (except when you have a flight to catch in a distant town and a fall storm hits - more later...), which allowed me to explore southwestern England without having to drive on the "wrong" side of the road.  Transfers between trains also give sketching opportunities, starting with a pub in Reading on the way from Gatwick to Cornwall, where I worked on my burgeoning career as an international beer illustrator. 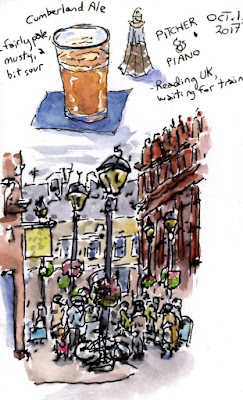 English Heritage kindly provided us with a group of drunken lads on the next leg of the journey - fortunately more amusing than obnoxious - so we were able to enjoy that aspect of British culture.  My first foray the next morning was to St. Ives, a palm-bedecked coastal village near the southwest tip of the country.  It started with a transfer in the little village station of St. Erth, where there was a pleasant tea room and another 30-minute sketching opportunity. 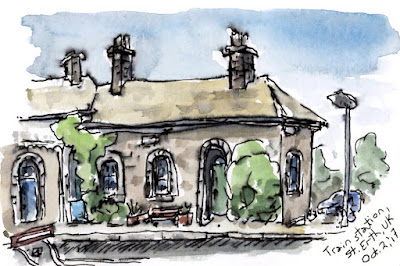 St. Ives is a lovely old fishing town, with traditional narrow winding streets and stone cottages in the old part of town.  Someone was playing a fiddle and singing sea shanties nearby, mothers wheeled prams noisily up the steep cobbled streets, and everyone stopped to say hello and check if my drawing was up to local standards. 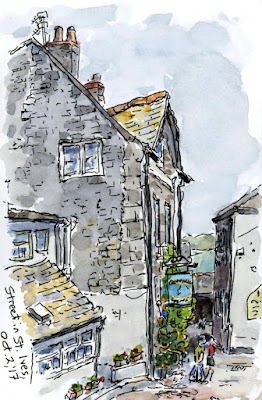 St. Ives is also a beach town, probably overrun in the summer, but just pleasantly busy in October.  I arrived in sunshine, but the remnants of an Atlantic hurricane were bearing down for an afternoon arrival.  There were big waves on the town's beaches, and even a few surfers.  I walked out into the heath along the headland on the Southwest trail that starts in the town to watch waves crash against the cliffs. 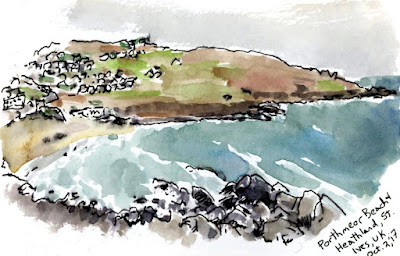 Needing to recover from such exertions, and pass a bit of time out of the storm before my return train, I found - surprise - a pub, with a view of the harbour. 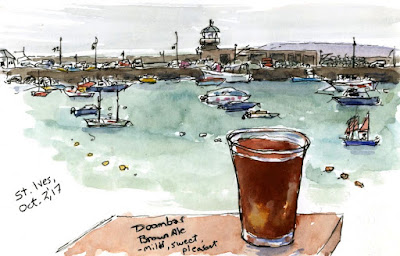