On my second day in Cornwall, I walked from the hotel in St Austell to the port of Mevagissey (pronounced "Mvgsee", apparently).  I learned that British signs report distances in miles, and that miles are a lot longer than kilometers when you are walking.  But the unexpectedly long trail was a classic of laneways, woodlands and English countryside, and came complete with people in Wellies, people in tweed jackets, people on horseback and even a bedraggled shepherd/hermit/Druid(?) who stood behind me mumbling to himself as I drew. 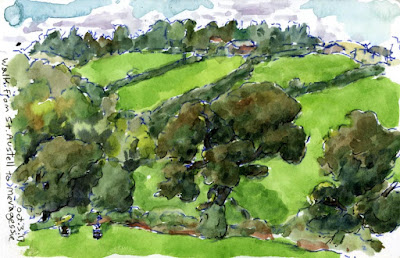 The harbour at Mevagissey is enclosed by two sets of ancient stone wharfs, full of picturesque boats, and backed by the pretty town.  The only thing it lacked, when I got there, was water.  They are serious about their low tides in that part of the world.  But the tide was rising, and in the time it took to eat a Cornish pasty (an acquired taste, which I failed to acquire), the boats were afloat and several were heading out to sea. 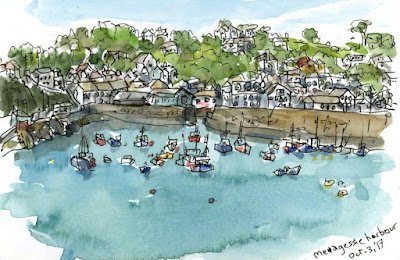 If this boat looks like it is sitting partly out of the water, that's because it was - it's keel was still on the bottom as the tide came in.  It has a colour-coordinated post on the non-dock side to keep it from falling over. 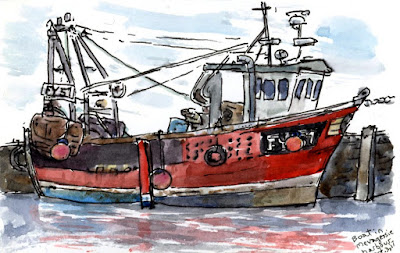