There's more than planting, weeding and harvesting in the gardens around here.  Last night was the volunteers' dinner for the Edible Garden Project at Loutet Farm, our highly successful just-down-the-street urban farm.  A hundred people or so had an amazing potluck dinner out in the fields, followed by a kazoo-playing poetry reading and a square dance (in the parking lot - no lettuces were hurt during this event).  It turned out to be the one typhoon day of the summer, but the canopies did their job and the weather fury held off until it was time to pack up, when it did get a little bit damp.

Before that, we went to an evening of little plays put on by the Environmental Youth Corps in Strathcona Garden, a huge community garden in Vancouver.  The audience walked from garden plot to garden plot, trying, rather unsuccessfully, to connect the theatrical plots, performed by the youth corps people in masks accompanied at times by talking apples.  There was also a large piano in the middle of the garden, which they were quite proud of because they had grown it from seed themselves. 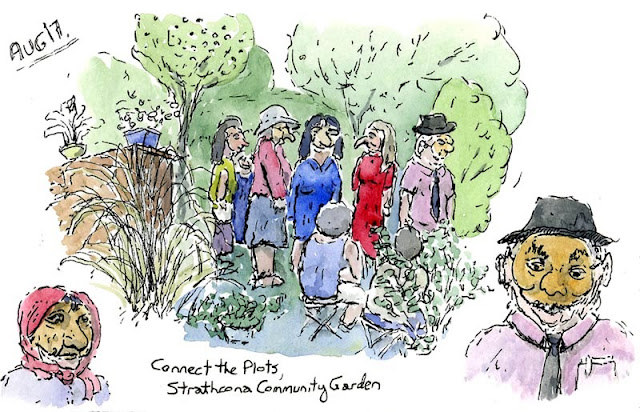