From Southampton to the somewhat bigger and busier New York City...  The excuse was a birthday party with my high school classmates, who are much older than me and therefore having their 50th birthdays this year.  But I'd never been to the urban-sketching mecca, so we spent five days there, and I did a lot of frantic drawing.  We checked off many of the well-known sights, but the list of really well-known places that we didn't get to, even just in Manhattan, is probably longer than the entire list of well-known places in any other North American city.

The Empire State building was first, since it was nearby and pretty easy to find.  It actually doesn't look enormously big, maybe because of its complex shapes and human-scale windows.  The standard glass office towers of many cities look bigger, because they are so unfriendly.  I drew the building standing on the corner of 5th Ave and 33rd St - like everywhere else in the city, a throng of people on one side of me and taxis on the other.  But New York sidewalks are full of permanent scaffolding - building inspection laws and avid lawyers mean that it is easier and safer for owners of buildings with old facades to keep these up all the time.  They provide good posts for sketchers to lean against and not be run over by cars or pedestrians. 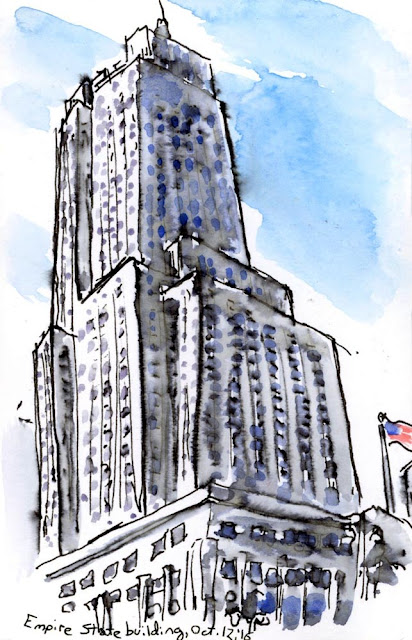 The main branch of the New York library is a fantastic place, with a fabulously grand reading room.  If I lived there, I'd be in there reading all the time, just to be there.  Or maybe not - there would probably be too much other stimulation to fit in anything so contemplative.  They only let camera-toting tourists into one corner of the room, but I confidently strode right in with my sketching gear and no one questioned me. 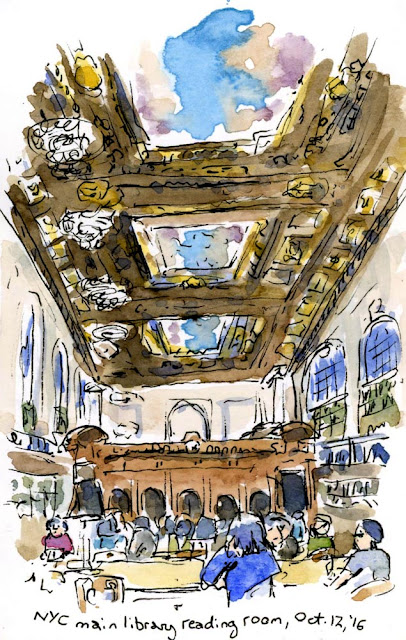 My mom told me that when you turn 80, they make you take tests to renew your driving licence, which include drawing a clock.  Apparently it's a struggle for people with impending dementia.  I have a few years to go, but I started practicing with the clock outside Grand Central Station.  I'm hoping to say to the driving inspector "I need a couple more minutes, I'm still working on Minerva's robes." 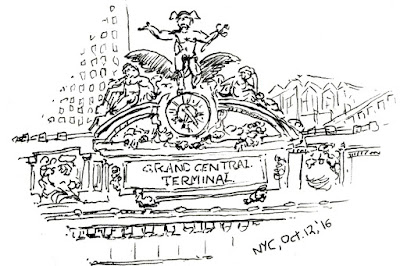