I've had people crowd around me when I'm drawing, including Ecuadorean policemen and Cuban soldiers, and small people have climbed right on to me a couple times, but I've never actually been physically assaulted - until I got to Times Square in New York.  They have bleachers overlooking the craziness of the square (which is a triangle - am I the first person to notice that?).  It's a great place to draw the scene.  I was drawing peacefully, talking to a few other bleacher-sitters, when two immensely pudgy 8-year-old boys from Wisconsin or some other fly-over state (as New Yorkers contemptuously call anywhere else besides Los Angeles) came up to me, each holding an immense bag of M&M's.  They stood staring at me, handfuls of partially masticated candies drooling from their mouths.  I showed them my drawing, made every effort to be polite.  Then they went and stood right behind me and started making squealing noises that quickly became full screeches when I ignored them.  Next, they start poking me in the shoulder.  I continued ignoring them.  Finally they switched to punching in me in the head.  I lost it at that point - I leapt up, spun around and was one millisecond from throwing them off the bleacher onto the crowd below.  Fortunately, I remembered about lawsuits in the nick of time, so the New York Times headline didn't read "Hurled Iowa brats crush twelve".  I just moved so I was surrounded by a nice Swedish family.  But really, what are two awful children from Nebraska doing without parents in New York, and who thought it was a good idea to buy them 10 pounds of chocolate?  Anyway, I like my drawing.  It's the busiest place I've ever been. 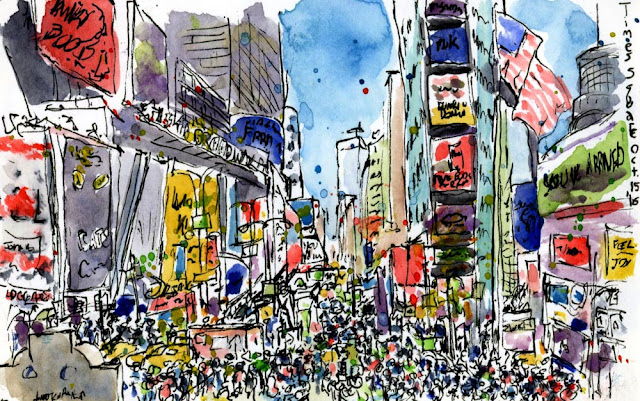 You have to go to a Broadway show if you're in New York, if only because every one you mention your trip to will ask if you did.  Fortunately, we don't feel any need to go to the trendiest shows, so we got to go to one we like.  We like cats, and look, there's a whole show about them!  It's being re-whatever-the-word-is on Broadway after a decade break, and we'd never seen it.  Hopefully some critic has said that it is "full of sound and furry, signifying nothing", because that's a good line.  There's nothing resembling a plot - but I don't think you go to Broadway musicals for moments of profound contemplation and insight. There are lots of feline characters, colourful costumes, lights and dancing, it's extravagant and fun, and a novel place to draw, which itself is worth the price of admission. 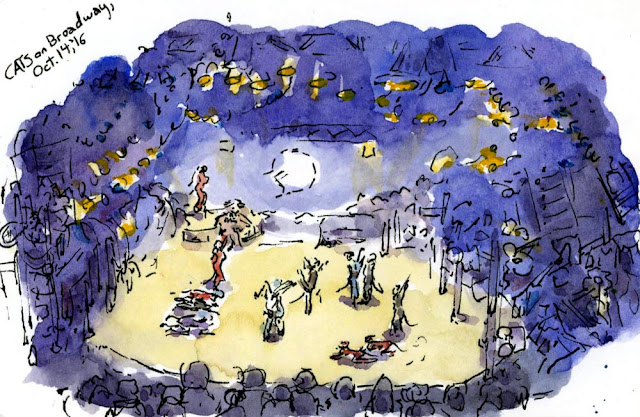