New York 3: The statue, the skyline, the subway, the highline

The Statue of Liberty doesn't need much introduction.  So I'll jump right to the big question: Is the Statue of Liberty male?  You have to wonder when you've done a lot of life drawing and you see that big square jaw, the huge crushing hands and the distinctly barrel-shaped body.  On the other hand, I guess, who really cares?  It's a great iconic symbol, whatever gender it wishes to be. 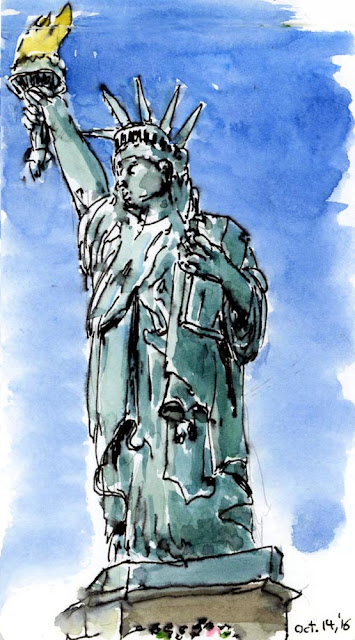 The same immensely crowded (!) harbour boats continue from the statue to Ellis Island, which served as the main immigration gateway to the US for several decades.  It has a wonderful museum, full of old pictures of the immigrants and what their world was like.  I didn't get enough time there, because the island also has a classic view of the Manhattan skyline, including the soaring One World Trade Center.  It too is a symbol of a tragic past for many, and a hopeful future. 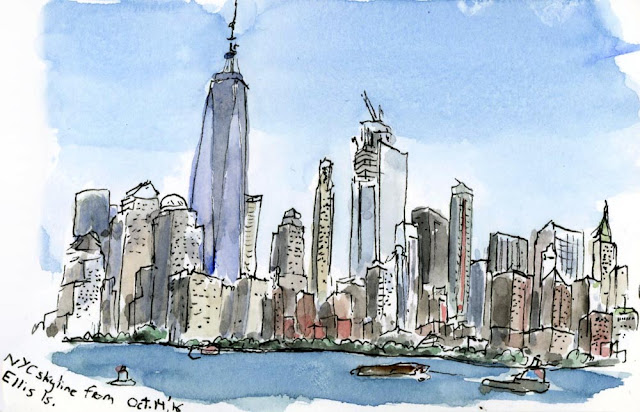 I was nervous about the New York subway.  I remember images from the 70's and 80's.  But it turned out to be safe, efficient for getting everywhere, and kind of fun in a rattle-trap old circus ride sort of way.  It was also the only place we really encountered the archetypical Rude New Yorker - two ladies, 4-foot-10 tall, who stood right across the doorway, arms locked to the poles, and refused to let anyone on or off the train, ignoring all polite and less-than-polite requests.  All while complaining in loud grating voices about their therapists.  Keep it up, ladies - you're a tourist attraction! 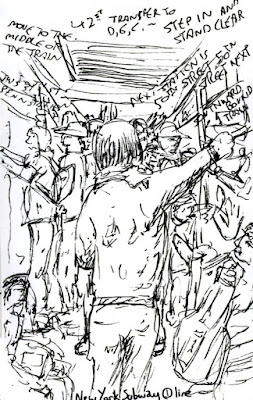 The High Line trail is a former elevated railway down the west side of Manhattan that has been turned into a walking trail, complete with native vegetation, art installations and, on a sunny fall afternoon, an entire mid-sized city worth of people.  It weaves around and sometimes through buildings.  There are benches, and even little grandstands looking out over industrial buildings, the river, street scenes or the crowd.  It's pretty much what I would come up with if I was asked to design the World's Greatest Urbansketching Park.