Continuing my series of Lonsdale blocks in random order, I drew block 36, well above 29th Street where the numbers run out.  I left early for the ride up the parabolic hill, beating the heat and most of the huge roaring pick-up trucks that seem to rule that part of the road.  There was already a smell of smoke in the air, from the clouds of it that were about to engulf the city for several days.  The block itself is essentially one big hedge on both sides of the road, but it has a distant view of the ocean and the city.  There were a surprising number of passers-by on the steep hill.  Most looked at me sitting on the sidewalk painting, and decided I was probably harmless but best not to make eye contact.  However, one person watched me for a while, then offered to buy the drawing, which is in an almost-complete sketchbook.  I declined. 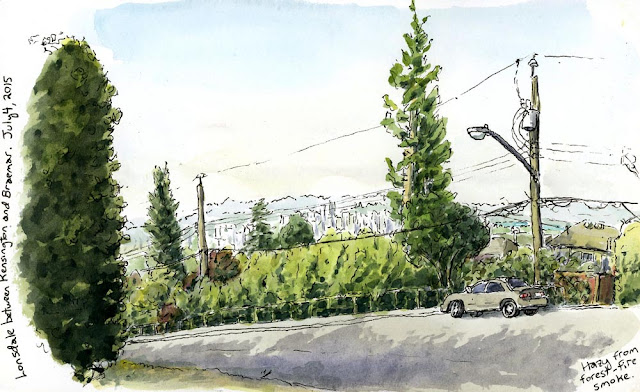 Back down at the more civilized - or, at least, less hedgy - end of Lonsdale, I did the 11th block this morning. Confusingly, this is also the eighth and/or tenth block, due to a historical accident in laying out the city's gridded streets - eight and tenth streets intersect nearby. I can just imagine the two survey crews when they met up...  There is a view of the harbour and downtown again here, straight down the hill where the road bends twenty degrees due to the aforementioned historical accident.  People were chattier here, and every one of them said how much they were loving the cool, damp, almost drizzly weather, after two months of hot dry and recently smoky days.  Someone walked by whistling "Walking in a Winter Wonderland", which is taking it a bit too far. 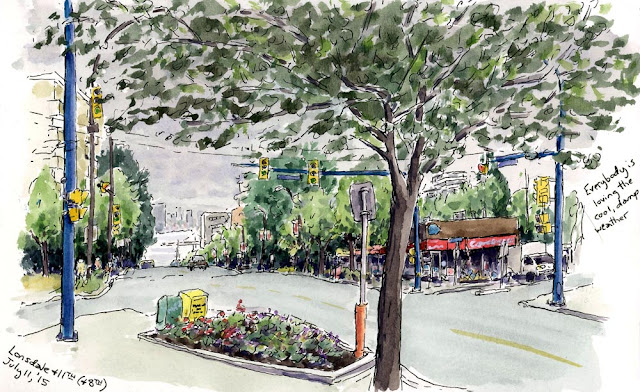