After a few days in Toronto, I caught an early morning flight to Varadero.  The Toronto airport at 5:30am is a grey place, particularly when you're drawing it with only a water-soluble pen. 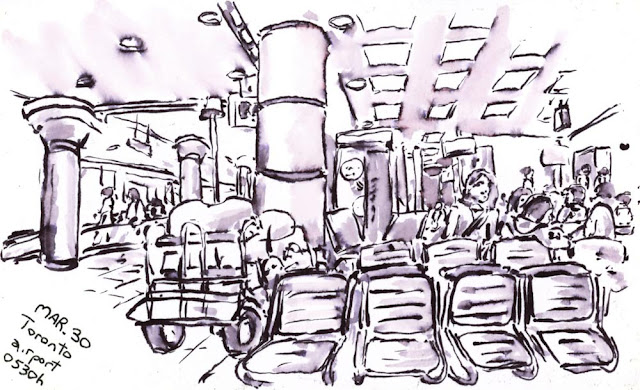 Walking out of the Varadero airport was pretty much like the point in the Wizard of Oz movie when colour was invented.  Not to mention warmth, and those tropical smells.  Almost everyone going to Varadero is on an all-inclusive package vacation. That may not be complete hell, but in my opinion it would be the equivalent of a long stay in purgatory.  Fortunately, one tour van was headed the other way, into Havana, so I got a cheap ride for the two hour trip in a spare seat in the back.  It came with a guide - a government employee, of course, since almost everyone in Cuba is a government employee.  He enthusiastically related the glorious history of the country, pointed out the fabulous factories, recited patriotic poetry, and, being a young latin male, sang along with the reggaeton on the sound system and pointed out every pretty girl we passed by yelling "!Chica bonita! Wow, Cuban girls!" It was a good introduction to the country. 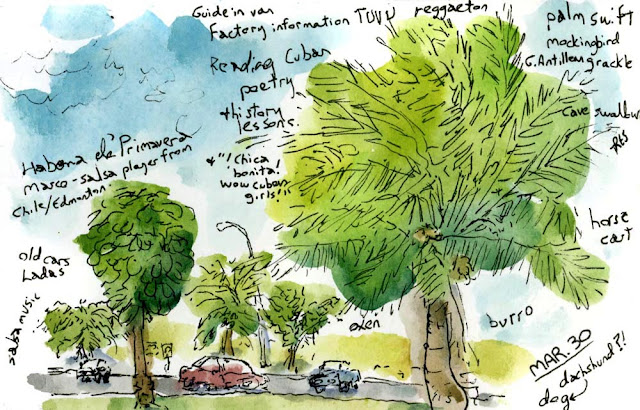 We stopped for drinks at the end of the longest bridge in Cuba - a marvel of Cuban engineering, we were told - called Puente de Bacunayagua, but better known as Puente de la Suegra (the Mother-in-law Bridge).  You can figure out why.  (Hint: It is very far off the ground, and the railings are short).  The next long bridge we crossed had a Spanish sign saying "Bridge in Poor Condition".  Everyone crossed it very slowly to avoid shaking it too much, and they made sure there weren't two heavy vehicles on it at the same.  It was not a marvel of Cuban engineering. 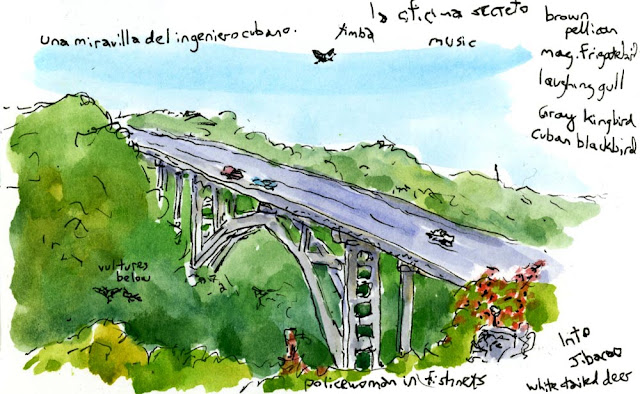 Arriving in Havana, I was immediately and wonderfully overwhelmed, and remained that way for the rest of the trip.  One woman I talked to said she broke down crying after her first day in Havana, because it was so...everything: beautiful, frustrating, elegant, decaying and collapsing, frantic but peaceful (no traffic), full of life, music and garbage, perfectly safe if you don't break a leg falling down a sewer hole or have a bag of concrete fall on your head (I had a close call on that one).  Old Havana, where I stayed in a casa particular (=private house), is a UNESCO World Heritage Site. That has supported restoration of some main buildings, plazas and a few complete blocks.  Day trippers from the resorts stick to those areas - and so get a misleading idea of the city - and that's where I did my first Havana sketch. 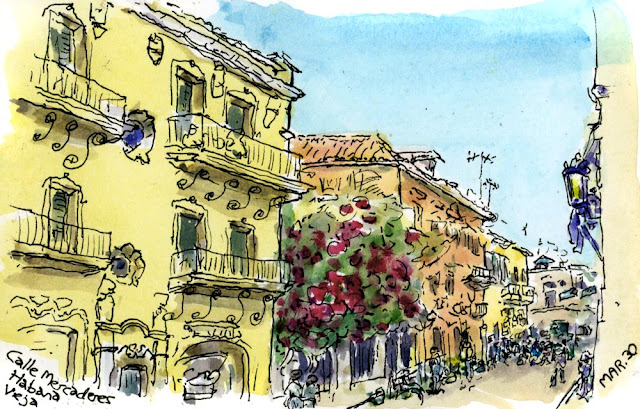 Most people live in a small set of rooms in old buildings that are a confusing warren of intersecting apartments with various private and partially shared spaces.  But people spend much of their time outside on the street, front doors open, sitting on the steps or out on their balconies.  These two ladies across from my room were having a lively conversation.  What about, I have no idea - my Spanish is okay, but no match for the Cuban dialect, particularly with the ubiquitous salsa music, yelling, passing 1950's Chevrolets, and salesman sing-song advertising their wares. 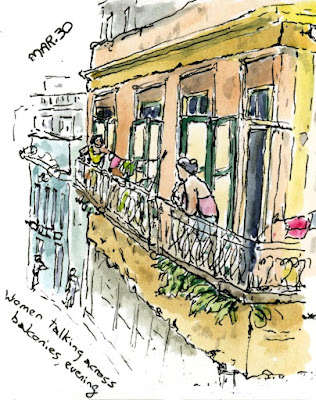