Cuba Day 6: Viñales and back to Havana

On my third day in Viñales, I went for another morning walk, for the early birds - avian and human, as the farmers start at dawn to avoid some of the heat.  I ended up at a cave part way up one of the littler mogotes.  There are a couple big caves in the area that are main tourist attractions (one has a disco in it), and hence dis-tractions to me.  But this one was basically just a cave, with no one there.  The fun thing was that the cave went right through the mogote, and was long enough that it was pitch black for a little bit in the middle.  I started on the hot dry south-facing side with lizards basking on the rocks, and popped out on the cooler north-facing side in thick vegetation with a Cuban trogon, Cuban solitaire and Cuban vireo singing right there.  It was a nice shady place to sketch the view down to the valley. 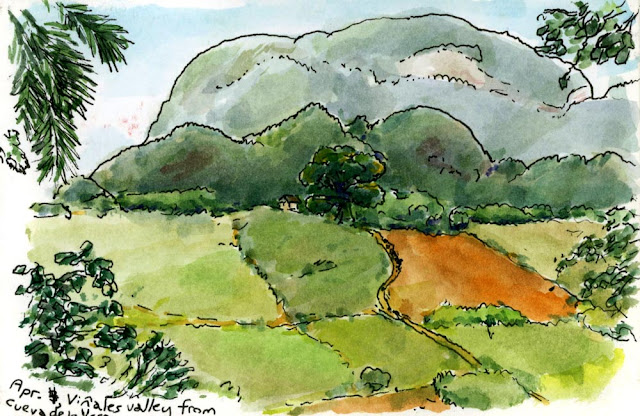 I had a bus to catch that afternoon, I didn't know the area, and there was no trail ... but, I have a pathological inability to go part way up a (little) mountain without going to the top.  So I scrambled to the summit.  It was a bit of a challenge, with some razor-sharp rock edges and innumerable prickly things, including a vine-like cactus that I'm quite sure actively leapt towards my neck.  But I made it up, and down, and had time in town to draw some of the flowers that make any tropical town pretty.  I ended up gathering quite a crowd of schoolkids on lunch break, not to mention a German tour group, watching me draw, while a feral dog who followed me on my hike slept at my feet. 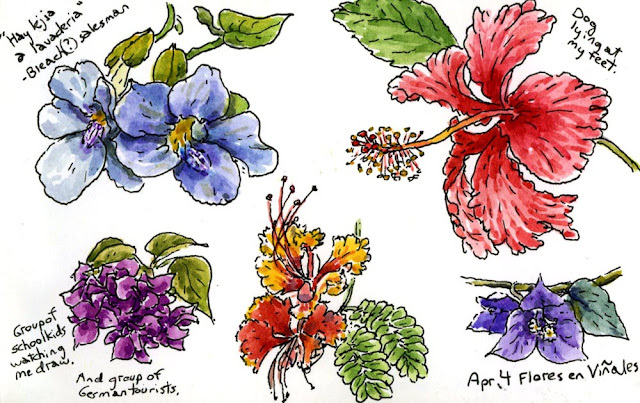 I had a few more moments to do a quick sketch of the casa I stayed in.  I had to note the nurses walking by in fishnet stockings, similar to policewomen I had seen in Havana and on highway patrols.  It's just part of the culture, and these women are completely professional - the police were just as armed as their male colleagues, and the nurses were doing their rounds checking on the elderly and sick people (something our health care system couldn't afford).  I saw one small boy shortly after he had fallen face-first off a railing.  A doctor showed up on a bike in about 5 minutes, and I saw a nurse visiting the next day.  There are a lot of challenges for the many poor people in the country, no doubt, but health care is not one of them. 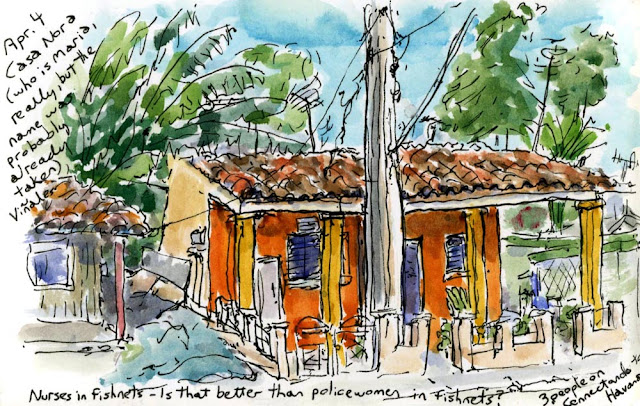 The bus back to Havana had me and two French tourists.  It's hard to find tickets, but once you get one, they honour it!  Back in Havana I went to a government restaurant called "Hanoi" - reflecting political alignments, not culinary ones.  (The other places I ate were all private paladars, which is a fairly new development).  The government restaurants have a bad reputation, but the food was fine, and cheap, and the dour waiter was almost jovial when I was teasing him about whether "the best mojito in Havana - if we lie, it's free" was perhaps only the second-best mojito in Havana.  I didn't push the argument, because it was almost free to start with.  Service is supposed to be terribly slow, but I found it exactly slow enough for me to draw (badly, again), the old car outside the window.  I then spent the evening sitting in the adjacent plaza, mostly a tourist-free zone where families come for the kids to play and the adults to discuss the state of the world, baseball, and who knows what else. 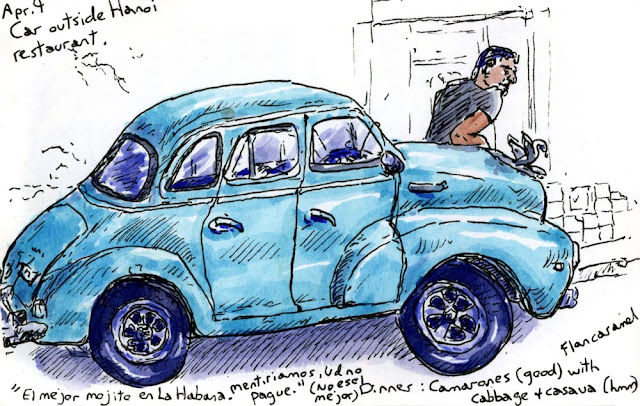