On day 3, I hopped on a bus to Viñales, a small town in a very traditional agricultural area near the west end of the island.  Tourists are strongly discouraged from taking the normal buses in Cuba, to avoid stealing space from Cubanos and pushing prices up, and also to get the all-important foreign currency.  The buses are the nicest I have ever been on in the tropics, and, remarkably, they run on schedule.  The only problem is that it is almost impossible to find the schedule, short of taking an expensive taxi out to the bus station to look at the wall.  There is a whole legion of people employed by the government to tell tourists that they don't know the bus schedule.  So I just went out to the station early, and got lucky with a seat on a bus that left in an hour.  While I waited, I went out to the parking lot and faced one of my drawing demons - cars.  In particular, the classic American cars that form about 1/3 of the small fleet of vehicles in Cuba (Ladas are another third, then a mix of newer Asian car, the occasional Volkswagen and one "Polski Fiat" which was the humblest looking car I've ever seen).  Drawing old cars is like life drawing, with overlapping curves define the form, and it's similarly very obvious when you get something wrong. Like most of the features on this beauty: 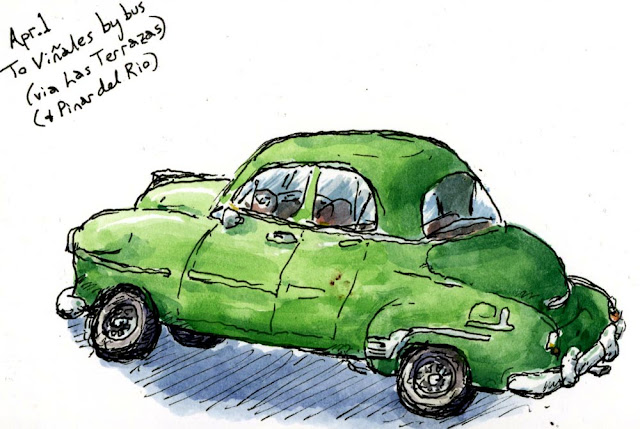 I like to draw on buses, because it is essentially impossible.  Although there were none of the usual Latin American three-way passing manoeuvres on blind curves, the roads are in pretty rough shape, as you can see in the drawing.  But if you look carefully and imaginatively, you'll see royal palms (the Cuban national tree), a ceiba tree, a turkey vulture, a thatched house, a rider on a horse, an ox, small farm plots, sugar cane, a chicken, a goat, some little mountains, and a message from Che saying "!Homeland or death!"  And also the crucial fuzzy dice, which take the place of Jesus and Mary icons
in protecting atheist Cuban vehicles from the vagaries of the road. 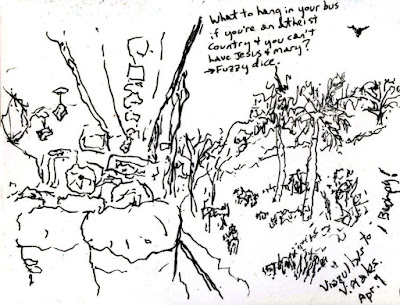 Viñales is a pretty town.  Almost too pretty, because most of the houses are very clean-looking and painted bright cheery colours.  It's not a coincidence that most of them are also casas particulares (private homes with rooms for rent by tourists).  The history though is that a hurricane destroyed many of the older houses; the many new houses are the government-supported replacements.  The little old church may have been supplanted by a cargo cult centred around the tourist buses, but for many people, life goes on as always.  Horses and horse carts are a main form of transport, heavier goods are carried in ox carts, and townspeople mostly sit around in rocking chairs in front of their houses.   I suspect if the tourists disappeared, things would pretty much just continue on as they always have. 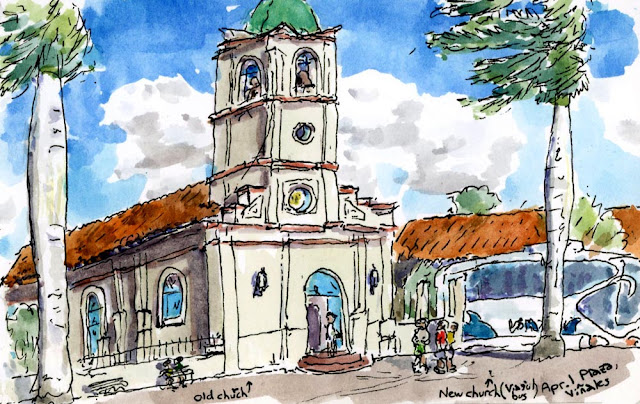